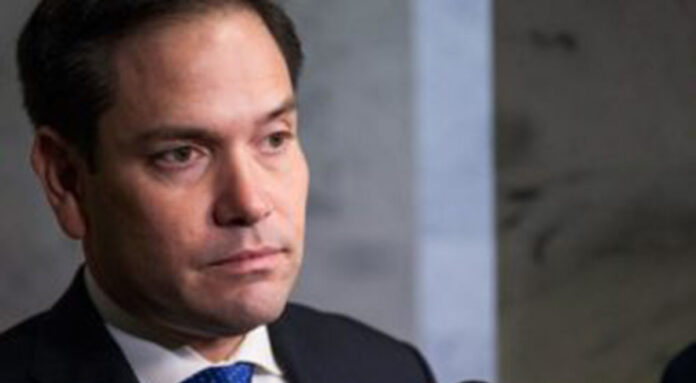 Fox News’ Chris Wallace found himself facing an incensed Sen. Marco Rubio when he posed the question of whether former President Donald Trump should be allowed to run for public office again.

The question came up during a broader discussion about the potential for lawmakers to impeach the president, even after he has already left office. That pursuit has caused emirates to once again go after the president, guns blazing, believing that they can now impeach the sign of conservatism that they loathed for so long.

Impeachment again picked up steam when protesters were involved in a riot on Capitol Hill. Congressmen and talking heads have accused the president of “inciting insurrection,” something that would be highly prosecutable, if true.

When asked by Wallace if he believed that this trial should go forward, in the context of making sure Americans were never able to vote for Trump again, Rubio didn’t mince words:

“I think that’s an arrogant statement for anyone to make. Voters get to decide that. Who are we to tell voters who they can vote for in the future?” Rubio said. Trump’s second Senate impeachment trial starts Feb. 8, and a conviction would disqualify him from running for president ever again.

Rubio made a similar argument on “Fox News Sunday,” saying the impeachment trial is “counterproductive” and will “continue to fuel these divisions that have paralyzed the country.”

“The first chance I get to vote to end this trial, I will do it, because I think it’s really bad for America,” he said.

For Democrats, working against the former president has come as second nature. Speculation has reigned supreme that one of the reasons the president failed to find favor with so many politicians that he was previously personally friends with, is because they were unable to depend on him to “play ball” S it were, in political circles.

That theory was solidified by the president’s declaration early on in his term that said he wanted to “drain the swamp, meaning that he planned to make sure those with who had been working in Washington, mucking up the works and making Americans lives more difficult for decades, got thrown out on their ear, and those much more beholden’ to the people of the United States would come in, and be replaced on a regular basis.

Politicians who have been in power for three or four decades are no doubt the most adept at navigating the trials of Washington’s life, but they’re also people who are so ingrained in the culture, and so beholden to other politicians through favors and secrets, that they are more likely to be serving themselves than the people who elected them to serve.

Sure, electing Nancy Pelosi or Chuck Schumer for the 27th time might seem appealing, because of the name recognition and their ability to name drop, but there comes a point that if voters want a different result, they need to try a different solution.

The different solutions before looked like a candidate that might shake things up, and it’s something that appealed to many. However, the president’s tenure in office kicked over enough rocks that the scary things that slithered out have Americans questioning what options are left.

Rubio said that no one should tell the American people who to vote for, and that’s a compelling statement. However, the true battle that Americans face now, is whether they’ll ever be able to vote anyone into office ever again.

Free and fair elections have been the hinge pin of America since patriots were dumping tea into the Boston harbor, but in the year 2020, it seems that we again came to a crossroads, and were compelled to go down the path that might again force us to stand up to a tyrannical government, by whatever means necessary, if we ever want our votes to be fairly counted again.