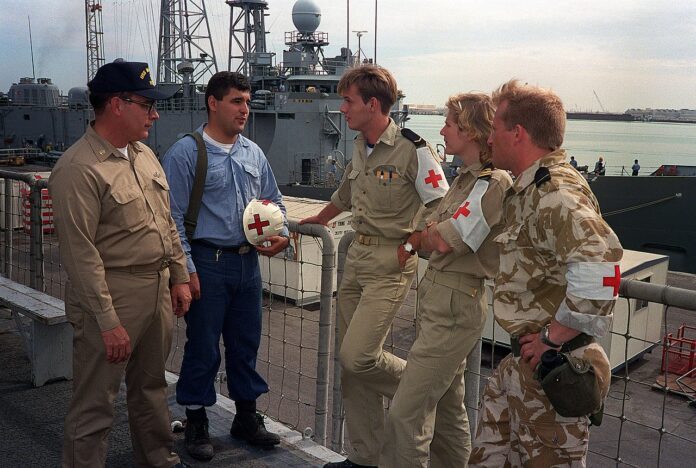 As you likely heard, if not experienced yourself, there has been a massive push in recent years to increase the amount of diversity training and general ‘wokeness’ in our military branches. And to some degree, that’s a good thing. However, as a recent report indicates, it has come at a cost – and a rather massive one at that.

According to the report, titled, “The Fighting Culture of the United States Surface Fleet,” the encroachment of wokeness in our Navy has taken such high importance in recent years that it has quite literally pushed out the preparedness needed for our sailors to engage and win any actual warfare at sea.

Or at least that’s the main takeaway from the report.

Prepared by two retired members of Navy brass, Marine Lt. General Robert Schmidle and Rear Admiral Mark Montgomery, the report indicates that readiness skills needed to not only operate a ship but to fight off enemy attacks has plunged drastically due to the increasing and nearly obsessive push to have more diverse and less offensive sailors.

The report was commissioned thanks to an increasing number of instances in which our Navy has unsuccessfully handled missions. These include the forced surrender of two of our amphibious crafts to Iran in the Persian Gulf in 2016, ship collisions in the South China Sea and off the coast of Japan, and fire aboard another ship in 2020 that resulted in the entire ship being lost.

These instances point out a glaring problem with our naval fleet, proving that they have stumbled and rather embarrassingly in situations where they shouldn’t have a problem handling the vessel or engaging in enemy fire.

Naturally, this has led to questions of just how much combat training and warfighting exercises the brave men and women enlisted in the Navy are getting.

And the answer to those questions is even more embarrassing.

According to one of the 77 current and former Navy officers interviewed for the report, “I guarantee you, every unit in the Navy is up to speed on their diversity training. I’m sorry that I can’t say the same of their ship handling training.”

Another interviewee, a lieutenant on active duty, said, “Sometimes I think we care more about whether we have enough diverse officers than if we’ll survive a fight with the Chinese navy. It’s criminal. They think my only value is as a black woman. But you cut our ship open with a missile and we’ll all bleed the same color.”

Still another former active-duty, now-reservist says there’s absolutely no curriculum for warfare and wartime fighting. Instead of being trained and educated on current world conditions, say in China or Russia, sailors schooled on making sure they have the correct uniforms on and that their unit symbols don’t offend someone.

As the report makes clear, things like diversity training, exercises that prevent human trafficking and sexual assault, as well as suicide prevention are all critical and even appropriate. However, it also makes clear that when it is focused on too much, it comes at a relatively high cost.

As Arkansas GOP Senator Tom Cotton and former Navy SEAL and current Texas Representative Dan Crenshaw say that the Navy really has just one purpose: “(t)o find and sink enemy fleets and to ensure freedom of navigation.” And they aren’t wrong.

I mean, what else was the Navy created for if not to engage our enemies at sea and keep them from attacking our shores?

But right now, our navy is proving that they are sorely equipped to do that. Meanwhile, potential enemies like China are adding new ships to their fleet every year, increasing their naval expertise, and upgrading military advancements without the concerns of needing non-combat things like diversity training.

As the report concludes, “Unless changes are made, the Navy risks losing the next major conflict.”