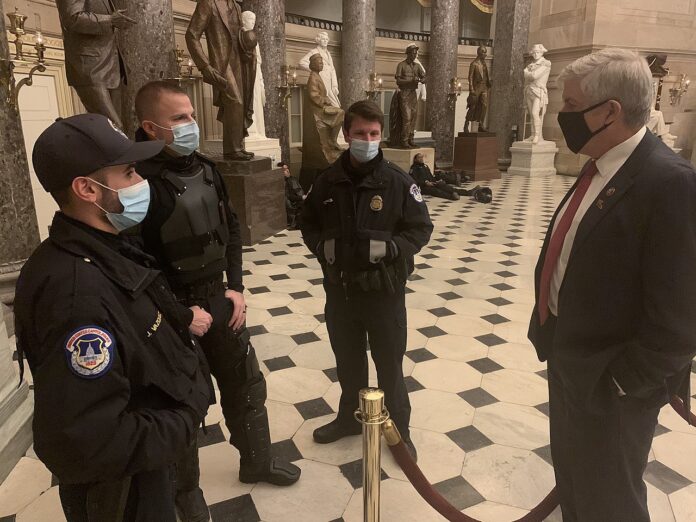 We’ve all heard it said, the January 6 Capitol incursion was our nation’s darkest day of the modern era – as if hundreds of people died, the government was flipped on its head, or a near-earth-ending event took place. At least that’s the political left’s version.

As a result, literal walls and gates were put around the Capitol Complex for months on end, security was increased in just about every building in Washington, and private security teams hired for Democratic congressional members en masse.

Now here we are, some six months after the “attack,” and the U.S. Capitol Police or USCP have finally taken down the walls, fences, and barricades that made our government’s seat look like that of a war-torn country’s.

But don’t think for a second that means they are easing up on security. In fact, if anything, they are only increasing it.

According to a news release both from the USCP and the Department of Defense, new methods, providing the Capitol with an “intelligence-based protective agency,” are now being deployed.

So what does this mean exactly?

Well, for starters, it means that USCP is going to begin expanding, including setting up offices outside of Washington. Yes, you read that right. The Capitol Police, whose job it is to ensure the Capitol is kept safe, will begin constructing off-site offices as if being farther away from the Capitol is going to somehow help.

But if that seems a bit excessive, just wait. It gets better.

In addition to moving officers out of Washington, the USCP is also going to be transforming itself into another “intelligence agency,” complete with high-tech surveillance systems and equipment on loan to them directly from the DoD.

According to a news release given last month, “Secretary of Defense Lloyd Austin today approved a request from the U.S. Capitol Police (USCP) for the Department of Defense (DoD) to loan surveillance systems to allow the USCP to improve U.S. Capitol security. Under this arrangement, the DoD will provide eight Persistent Surveillance Systems Ground – Medium (PSSG-M) units, on a reimbursable basis, for a period of one year.”

Naturally, the Army has been assigned to install these systems and then teach USCP how to use them effectively.

This means the USCP will now be equipped with things like night vision, high-tech listening and recording devices, spy software, etc.

The question is, what is all of this really needed for?

The incursion on the Capitol building was the first of its kind, resulting in a few protesters breaking in, taking some pictures, and causing some property damage. Some of it was even done with Capitol Police permission. Only one life was lost due to the attack and was the unfortunate incident of an officer’s bad aim.

And yet, apparently, if the Democratic left and USCP are to be believed, there are swarms of conservatives and American patriots out there just waiting to swarm the gate and kill everyone inside…

This means that all of this increased security, the thousands of dollars already spent on protection details, new ‘intelligence-based systems are all to simply support a political narrative that has done nothing but prove to be false.

In the USCP’s new release on the upcoming changes to their department, they made sure to mention the two officers’ lives who were lost shortly after the incursion, implying that the changes are necessary to prevent other similar losses from happening.

However, they fail to mention that both officers’ deaths had nothing to with the incursion or even violence, after all. Officer Brian Sicknick died from natural causes, according to a medical examiner’s report. And Howie Liebengood committed suicide several days afterward.

And yet, their names have now been forever used as nothing more than a political stunt meant to incite fear and panic. Oh’ and so the Democratic left can find new ways to spy on Americans.

Because one more politicized intelligence agency is just what we need…