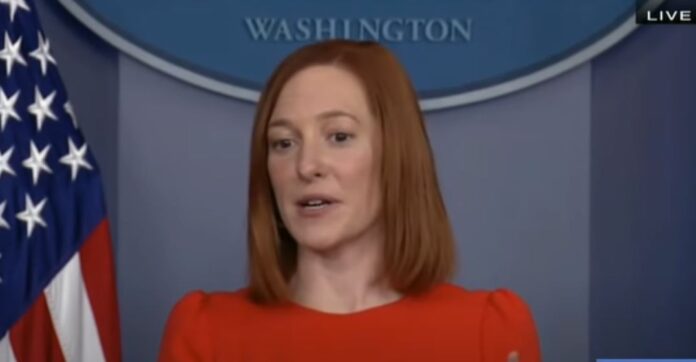 One of the first executive orders that were signed by Joe Biden was a mask mandate. If you are on federal property, you are supposed to be wearing your mask at all times. We weren’t too surprised by the mandate, to be honest. However, we were a bit taken aback by what happened next. These mandates only apply to the common man.

The great and mighty Sleepy Joe does not have to adhere to them. Right after the mandate was signed, Joe took a walk to the Lincoln Memorial, violating that same mandate. It would be funny if it weren’t so infuriating. White House Press Secretary Jen Psaki was asked about the violation of the mandate and her answer was telling.

You see, Biden did not need to follow the rules because this was a moment of celebration. No one can ever hold Joe accountable, as there is always a good excuse for whatever he has done. Psaki couldn’t even pretend that the question was legitimate. “We have bigger issues to worry about at this moment in time,” she said, brushing off any actual concerns that anyone may have had.

Fox News White House Correspondent Peter Doocy simply wanted to know more about this peculiar decision. All he got for his trouble was disrespect from Psaki. She couldn’t even be bothered to call him by his actual name. Instead of calling him Peter, she referred to him as Steve. This is his father’s name.

Psaki is wasting her time with these silly explanations. The Democrats can never just come out and say what is on their mind. Instead of admitting that they do not believe they should be following the rules, they make up stories that are supposed to excuse their behavior. It’s very childish behavior but no one on the left side of the aisle seems too invested in making them stop.

This “we are totally above the law” mentality is causing people to lose trust in the Democrats on an everyday basis. We figured that they would be on best behavior as soon as Joe was sworn in. The honeymoon period did not even last a full day before they started back up with the same old nonsense. Psaki is clearly going to be a thorn in the side of any reporter that wants real answers.

Biden and company are determined not to provide any. They aren’t even ready to be honest about all of the crimes that the Biden family committed during the lead up to the presidency. Imagine what she would do if a reporter decided to ask for answers when it comes to the Hunter Biden controversies. Joe’s never really explained those and he does not have any immediate plans to.

We are in for a long four years of softball questions and silly non-answers to any real question that comes along. So what happens the first time that one of the proletariat class decides that they are not going to wear a mask when they are supposed to because they have something they want to celebrate? No one is going to want to hear what they have.

They will be punished within a moment’s notice and that’s all there is to it. Biden and his cronies are the only ones who are going to be allowed to break the rules, as the conservatives already knew. We have spent the past few months trying to warn people about the hypocrisy that is going to be unleashed if the Democrats are allowed back into the White House.

If Joe really wants to unite the country as he claims, he would stop allowing two different sets of rules to exist. He would make sure that all Americans were made to follow the same mandates. A couple of days was all it took before Biden finally decided to show his true colors. We wish that we could act surprised.