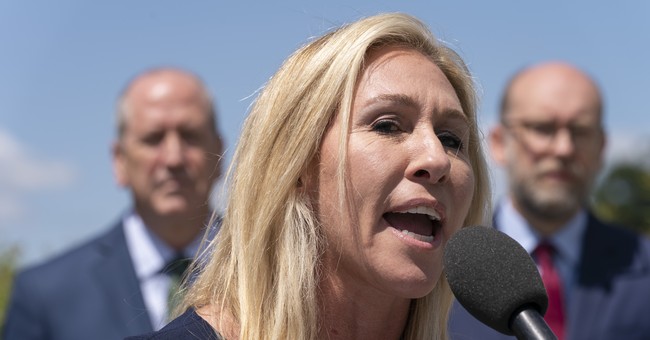 The “America First” Rally scheduled for the Anaheim Convention Center in Anaheim, CA tonight has been abruptly canceled.

Saturday evening’s “America First” rally at the Anaheim Event Center has been canceled. Anaheim officials say they expressed safety concerns with the private venue, and the operators shared those concerns. The event was also canceled at two previous venues, in Laguna Hills and Riverside.

Safety concerns? Antifa is protesting as we speak in Koreatown, so I think most of them are busy. This last line from the City of Anaheim’s tweet tells the tale:

“As a city we respect free speech but also have a duty to call out speech that does not reflect our city and its values.”

So, Anaheim’s values, which include a rampant homelessness problem, growing crime and drug issues, and a disparity between the very poor and the very rich, do not align with the America First agenda of love of country, Constitutional conservatism, and upholding our nation’s law enforcement.

Reps. Matt Gaetz (R-FL) and Marjorie Taylor Greene (R-GA), who spearheaded this nationwide tour, are unbowed, and determined not to be silenced. Gaetz announced on Twitter a peaceful protest in Riverside, California at 5:00 p.m.:

The “America First” Rally was originally scheduled to be held in Laguna Hills, at the Pacific Hills Banquet & Event Center, but was also abruptly canceled. The center’s Director and General Manager Javad Mirtavoosi spoke with the Orange County Register saying, “we just want to stay clear of that.”

The event was quickly moved to the Riverside Convention Center, but yesterday, the officials who manage and operate the city-owned center balked at having the event there.

The Anaheim cancellation marks the third time a venue has rejected the Rally and its attendees.

Plans to reschedule the event in Yucaipa, CA, near San Diego, are in the works.