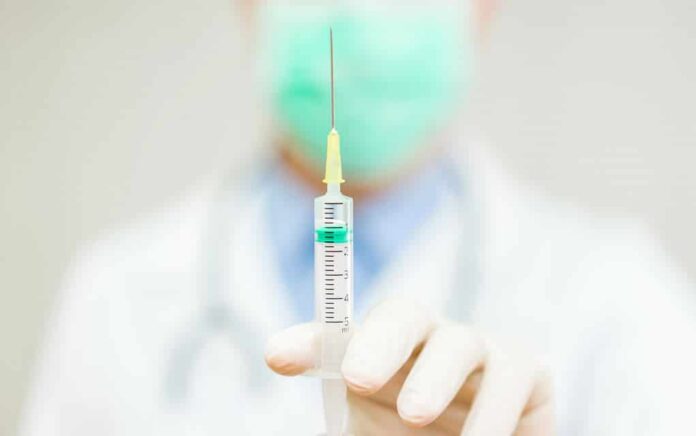 Not all COVID-19 vaccines are created equally. When the mad dash to get vaccines running through bloodstreams began, pharmaceutical giants were mixing a dash of this with a pinch of that in hopes of winning the coveted blue ribbon. Johnson & Johnson was the first to offer a convenient one-shot and done vaccine, but the only return they’re seeing from their rush to hop on the money train is in the form of serious consequences.

Johnson & Johnson’s hit it and quit it one-time inoculation bolted out of the starting gate with a warm reception from swarms of folks who didn’t want to deal with the two-shot process. But just like shopping at a 7-11, convenience comes with a price.

On July 12, The U.S. Food and Drug Administration announced they’ll be sticking a warning label on Johnson & Johnson’s product. So far, 100 cases of a rare neurological disease known as Guillain-Barre syndrome have been linked to their vaccine.

“The FDA is announcing revisions to the vaccine recipient and vaccination provider fact sheets for the Johnson & Johnson (Janssen) COVID-19 Vaccine to include information pertaining to an observed increased risk of Guillain-Barré Syndrome (GBS) following vaccination,” said a spokesperson for the agency.

The FDA still believes the benefits far outweigh the risks, but from their perspective, this is an easy thing to profess. Even with the risks thus far considered minimal, would you take the chance on beating the odds with your 14-year-old child? It’s a rhetorical question.

The FDA spokesperson said, “Based on an analysis of Vaccine Adverse Event Reporting (VAERS) data” which found “there have been 100 preliminary reports following vaccination with the Janssen vaccine after approximately 12.5 million doses administered. Of these reports, 95 of them were serious and required hospitalization.”

Despite the warning label, this is the basis by which they are claiming it’s still okay to receive the vaccine. Perhaps the victims and their families would offer different advice but no one’s bothered asking them. Yet…

In an attempted play on words, the spokesperson, shooting from the cuff, said the compiled data is “insufficient to establish a causal relationship.” Huh? They also added that there should be no fear of the Moderna or the Pfizer vaccines. Both are completely safe until such time as they are determined not to be once it’s too late

The CDC said they’re keeping a close watch on the situation but at the same time gave it a nonchalant shoulder shrug. “Every year in the United States, an estimated 3,000 to 6,000 people develop GBS. it is typically triggered by a respiratory or gastrointestinal infection. Most people fully recover from GBS.” Hence the word, “most.”

The CDC places GBS in the category of a neurological disorder. Muscles weaken as nerve cells come under attack from the body’s immune system, often incapacitating the victim via the onset of paralysis. The Mayo Clinic stated that most cases require immediate hospitalization.

J&J (Janssen) said they’ve “been in discussions with the U.S. Food and Drug Administration and other regulators about rare cases of the neurological disorder, Guillain-Barré syndrome, that have been reported following vaccination with the Janssen COVID-19 vaccine.”

This is not the first time the J&J vaccine has fallen under scrutiny. Earlier this year after some of the vaccine’s recipients developed blood clots, the CDC and the FDA ordered a halt to its usage. It had taken a couple of weeks for the clots to appear and by the time they did tens of thousands had already been injected. A few weeks later both agencies gave the vaccine the green light. What the heck. There weren’t that many occurrences. Full speed ahead maties.

Paid actors in government-sponsored ads telling vaccine skeptics they’re being silly, is not the solution for attaining an acceptable nationwide vaccination rate. How about taking a stab at the truth? We’re all big boys and girls. After the fact “oops” don’t do anyone a bit of good.

The long-term effects of all COVID-19 vaccines is an unknown equation. However. It isn’t our place to tell anyone what they should or shouldn’t do. That’s the government’s job. But we do feel an obligation to shoot from the hip. The rest is up to you. May you choose wisely.