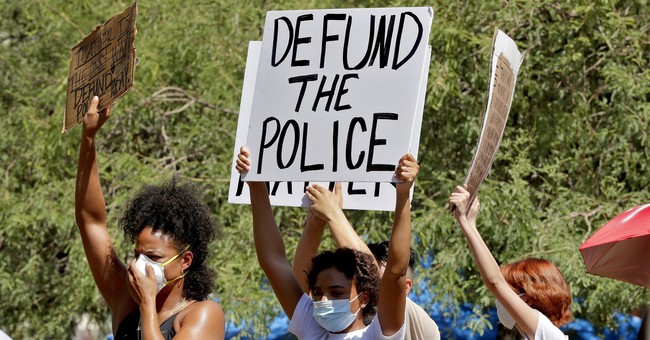 College — the final frontier of your official academic exploration.

What goodies might await, once you exit that premium educational institution known as high school?

If you’re planning to enroll in secondary school in Davidson, North Carolina, the answer could involve abolition.

Of law enforcement, that is.

As reported by Campus Reform, those attending Davidson College will have the opportunity to get their skulls schooled via a scolding of cops.

As announced on Davidson’s website, instructor Garcia-Rojas will teach the following course:

AFR 222 – #Abolishthepolice: Race and Policing in the U.S.

“This critical Black studies course,” the site explains, “explores the specific relationship between Blackness and policing in the U.S. from a philosophical perspective.”

We’ve reached a notably new place, societally. “Blackness” — as it relates to what someone endures in a world filled with “whiteness” — didn’t exist as a ubiquitous concept just a few years ago.

But these days, it seems heralded as a core of life in America — as the citizenry’s divided into Victims and Oppressors.

Also on the move: the notion of seeing color to the exclusion of unity — it’s presently portrayed as a virtue.

Gone are the days of yore:

Togetherness is no longer…in vogue.

Back to the North Carolina classroom:

We will enlist Black political and feminist theories and social and political philosophies to critically examine and think through issues of race, criminalization, incarceration, police militarization, predictive policing, surveillance, and domestic security.

As numerous experts have shown, the U.S. has the highest rate of police violence and misconduct in the world…

Which countries were considered in such a study?

Whatever the case, there are racist roots:

Scholars have shown that Black, brown, and indigenous people are disproportionate police targets.

The course will also take a stand for transgendered victims:

And because police violence and gendered violence are intrinsically connected, Black trans and gender nonconforming people, and Black people with disabilities and mental health issues, routinely experience surveillance, arrest, incarceration, and sexual assault at the hands of law enforcement at significantly higher rates than any other racial demographic.

Professor Claudia Garcia-Rojas has her own take; perhaps reform isn’t the answer:

While current mainstream conversations ask how can we reform the police to lessen harm against marginalized communities, I suggest we begin elsewhere. To understand the root causes of policing, I propose we begin with a deceptively simple question: What is policing?

Claudia appears to share the view of a Cypress College instructor who made headlines in April.

Responding to a student’s suggestion that police are “heroes,” here’s what she had to say:

Who would she call?

“I wouldn’t call anybody.”

If enough people come over to Claudia Garcia-Rojas’s side of the issue, perhaps Americans will no longer have to make that decision.

And students have good reason to take the class.

It’s a lot to think about, socially and scientifically.

Will removing the primary source for enforcing laws result in a more lawful — AKA a safer and more civilized — world?

But admittedly, I went to college in the dark days, before our modern enlightenment.

Rescue Workers Find Screaming Woman Stuck Between Buildings, Naked — and You Can Guess Where