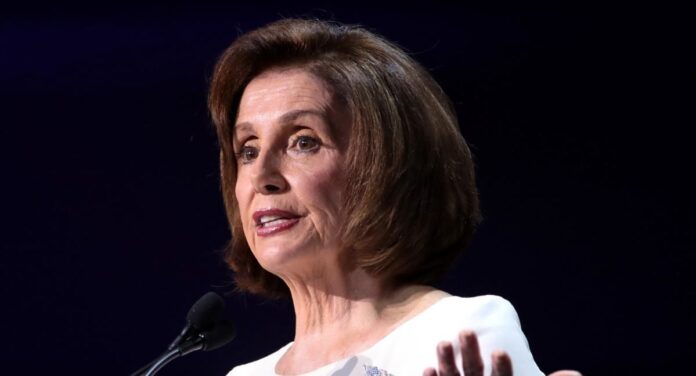 Guns are bad. If you ask Nancy Pelosi and any other left-wing politician in Capitol Hill, guns are bad. AR-15s, M16s, and the list goes on. Anything that can fire more than one shot in rapid succession needs to be banned.

Yet, that didn’t stop Pelosi from asking for machine guns on Inauguration Day. She actually requested that there be “crew-manned machine guns” for the security forces’ detail. This was confirmed by Acting Deputy of Homeland Security, Ken Cuccinelli.

How is it that guns are only bad when they’re in the hands of civilian residents? Suddenly, it’s okay if the military uses machine guns in order to defend the politicians of Congress and the new president and vice president?

A machine gun is a belt-fed weapon where there are at least 500 rounds shot per minute. It’s a weapon of mass destruction. It’s a “shoot first” kind of deal. Anyone standing behind a machine gun and told to fire isn’t looking to take aim at a single suspect. They’re not looking to slow down the mob. They’re simply going to spray the area with bullets that are meant to kill.

Forget about a jury. Forget about a criminal sentence. Pelosi was ready to be the judge, jury, and executioner on Inauguration Day. Screw this up and she’ll take you down for good.

Needless to say, such requests were denied. There were no machine guns on-premises. 25,000 National Guard troops were sufficient to send the message that Inauguration Day was not the day to mess around. And it worked.

However, this is an important thing to look at. Pelosi is fine with using any means necessary to defend the Capitol. Yet, the average American cannot use a much lesser gun to defend their home? Their family? Unbelievable.

Cuccinelli went on to say that the House Speaker’s requests were “beyond any legitimate security need.”

We weren’t at war. It was the inauguration of Joe Biden. To even suggest that machine guns be used in a civilian arrangement was horrifying.

Pelosi was concerned about Washington DC. After all, that’s where she was at. She had absolutely no regard for the health and safety of Americans who showed up to watch the inauguration.

Further, DC wasn’t the only city that had received threats. Every capital was threatened with violence – and the acting DHS secretary said that it was important not to focus solely on DC. He asked the question that many were asking – where was her concern for the rest of America?

Oh, wait, she didn’t have any. She was only ready to order extra National Guard and crew-manned machine guns when, as Cuccinelli put it, “their own butt was on the line.”

There’s only so much that can be done. DHS can only contribute so much manpower to keeping DC safe. To provide anything more would have been to sacrifice the safety of the rest of the country. Maybe Pelosi was ready to make that happen but, fortunately, DHS had the sense to deny her requests.

Thank goodness the Department of Homeland Security is committed to keeping everyone safe. If they were focused solely on the welfare of Congress, Americans would have been mass murdered at the order of Nancy Pelosi because people dared to take a step closer to the tape.

The Speaker of the House made a dangerous decision – a decision that looked out for herself without thinking about the repercussions. This is what she has always done. It’s why those in her District are suffering while she’s continuing to collect an impressive paycheck in DC. She doesn’t care about Americans. She cares only about herself.

The proof of that became crystal clear when she thought that machine guns would be the best way to keep herself protected. Meanwhile, she doesn’t even want Americans to own handguns so that we can defend ourselves. There’s something seriously wrong with this argument.