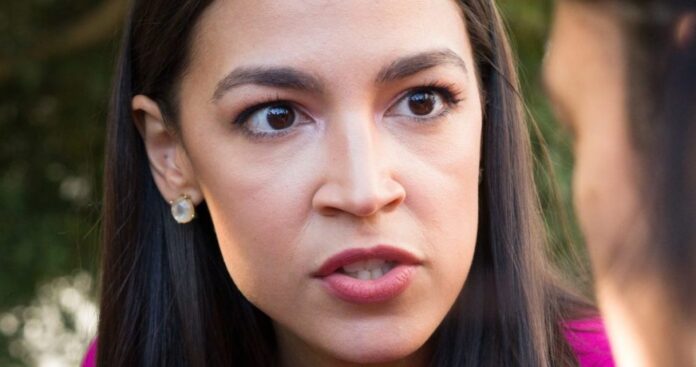 How is it that Joe Biden and Alexandria Ocasio-Cortez can be in the same political party? The president-elect says something and the Representative from New York gets disgusted.

We’re used to seeing discord throughout Capital Hill. However, it’s usually because the Democrats and the GOP don’t see eye to eye.

It’s amusing when the discord is within the Democratic Party. And it’s been happening with greater and greater frequency.

AOC is already upset with Biden. She’s confused about the math regarding the stimulus payouts.

Biden’s new stimulus plan is going to cost a whopping $1.9 trillion. It will include a check of $1400 to most Americans.

Well, yes. But, $600 of it was already paid out because Americans needed something until there could be the Congressional push for the full $2,000.

That allows Biden to complete his promise of making sure Americans get $2,000.

It makes sense to just about everyone. Not if you’re AOC, though. The Representative can’t comprehend that the country has to be fiscally responsible. She may truly believe that money grows on trees. She recently told the Washington Post, “$2,000 means $2,000. $2,000 does not mean $1,400.”

Unemployment benefits should be retroactive too. https://t.co/WRIiBAe0NY

It is $2,000, though. The only difference is that it won’t come as one check. Instead, $600 of it was already paid out. Why is this so hard for her to understand?

As many economists have already pointed out, many Americans who would be eligible to earn the stimulus check have remained working. So, sending out too much money can simply be dangerous. It won’t help the economy. It’s already been shown that the Americans who have remained employed throughout the pandemic have been growing their savings accounts. AOC will only be helping people to stow away government money.

Now, as for those who are unemployed? Let’s help them. Everyone can agree with that.

What everyone can’t agree on is passing trillion-dollar spending deals. It devalues the U.S. dollar and makes more people dependent on the government.

We should be trying to make people more self-sufficient, not less. Let’s invest in companies so that they can re-open and hire more people. Let’s get states to re-open their economies so that people can get back to work (Hint, hint, California). More importantly, let’s remove the teat that low-income families have been sucking on for entirely too long.

America is the land of opportunities. We claim that anyone can be anything. People have risen from the ashes before and they’ll do it again. There are work programs, trade schools, and colleges that anyone of any color and background can attend – often with scholarships and other free training.

AOC wants to pass more money because she wants to create dependency. It’s one of the steps toward converting the country into a socialist society. Of course, she and Biden don’t see eye to eye. They’re of different parties. She’s only part of the Democratic Party because of a ruse.

She’s really a Democratic Socialist, just like Bernie Sanders. And it’s not even anything that she’s trying to hide. She’s a proud member of the Democratic Socialists of America – and they’re the ones constantly funding her campaigns so that she can hold the positions that she does.

Why is it that AOC is continuously allowed to shove the country closer and closer toward socialism? Constant research shows that socialism doesn’t work.

Biden is actually doing the sensible thing – he’s doing the math and giving people exactly what was promised. No more, no less. $2,000 was promised. Congress already approved $600. So, pay out the $1400 and keep it at that. Anything more threatens to bankrupt the country.

Of course, AOC already knows this. And she has to be stopped before the country loses its democratic roots forever.