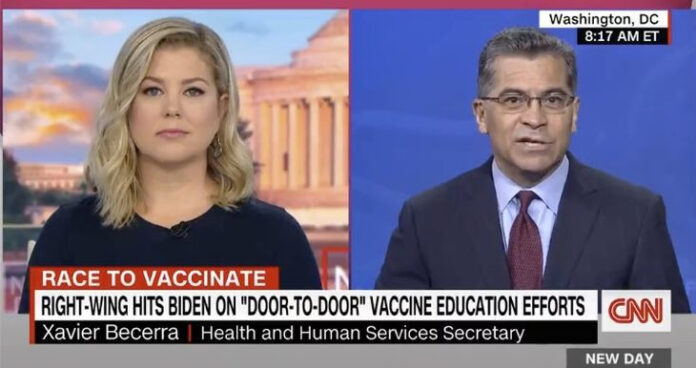 Republican vaccine holdouts are a thorn in the side of Democratic lawmakers at the moment. The argument that is being made here is counterproductive to whatever moment that the Democrats are trying to start, though. This is a man who has been on the left side of many California culture wars.

That makes him ill-suited to handling these types of concerns. We cannot think of a worse messenger here if we tried, outside of Dr. Fauci. Of course, conservative thinkers are going to be skeptical about the new door-to-door vaccination campaign that is taking place.

The point that is being made here is not something that is going to convince anyone who is on the fence about this idea, especially on the right side of the aisle. It comes off like he has spent his entire life speaking with those who reside in blue states and no one else. Public officials going door to door to provide vaccinations sounds like a good idea on paper but there are reservations that need to be addressed first.

Conservatives cannot be expected to go along with this one all willy nilly. They need to be told that it is the local officials that are going to be in charge and that these initiatives are not being run by the Washington, DC fat cats that they are so skeptical about. There are other concessions that need to be made as well.

For starters, why should the government have any access to people’s vaccination statuses? That is something that feels like a massive overreach from where we are sitting. Xavier Becerra decided to deflect on this and that’s where he starts to lose us. He claims that the federal government is only looking to fund and offer support to the local outreach efforts.

HHS’ @XavierBecerra on Biden’s controversial door-to-door vaccination program: “The federal government has spent trillions of dollars to keep Americans alive during this pandemic. So it is absolutely the government’s business” to know if you’ve been vaccinated. pic.twitter.com/PiYp0Peogd

Local officials are said to have access to the information, so that they can find out which neighborhoods are not receiving enough vaccinations. They are swearing up and down that Uncle Sam does not have access to that information. Or at least they should be! Beccera is making no such promises. In fact, he is embracing the idea of the government having more of our information.

We would ask if this man has ever talked to a right-winger in his life but near as we can tell, he does not even speak with average Americans. This is what happens when you spend all of your time snuggled up in the deep state. You lose all touch with reality and how the average American feels about things. Since he’s from California, this should not come as a shocker to anyone. They love to argue the wrong side of these debates over and over again.

Biden Covid adviser Jeff Zients warns Americans of upcoming shots: “As the president said, we will do this by going community by community, neighborhood by neighborhood, person by person.” pic.twitter.com/PbuGeWTo3F

You would think that they would get tired of it but they do not! It is important to note that there are certain circumstances where the government can access your information. If you are traveling or trying to attend a secondary learning institution, these are situations where the info may be made available.

White House COVID czar Jeff Zients is taking a much wiser approach on the matter. He wants everyone to know that the federal government is not going to be involved and is taking great pains to make that as obvious as he can. Locals who are known and trusted in their communities will simply receive the federal backing they need. This actually makes a lot of sense. If they led with this instead, who knows what the reaction might have been? Alas….