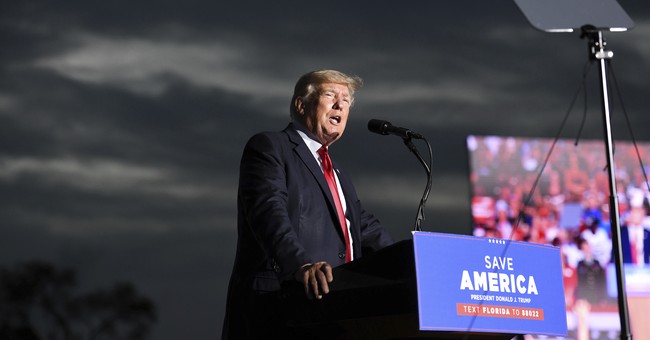 Former President Donald J. Trump closed out CPAC Dallas Sunday night, and my colleague Becca Lower reported on all the highlights of the speech. While Trump once again teased–but didn’t commit–to a 2024 presidential run, he did remind the world why he captured the American imagination and the White House in 2016, and why he is still a formidable presence and a clarion voice for our troubled times.

I mean, who the heck needs Twitter or Facebook anyway? Our 45th President continues to make his presence known just by being himself.

Trump was a huge media presence before he became president, and just because they tried to run him out of D.C. on rail, it didn’t diminish him. Trump has returned to his former prowess and influence–with the added benefit of being a Republican president of the United States and the titular head of the Republican Party. Despite WY Liz Cheney’s (R-Egregious) and IL Adam Kinzinger’s (R-Douchenozzle) protestations to the contrary, the majority of the Republicans in Congress, the Senate, Governor’s mansions and State Legislatures are happy with this fact.

And Trump continues to live rent-free in the Leftist Media’a heads–just ask Jim Acosta and Jake Tapper, who manage to mention him as much as possible because CNN’s ratings have tanked since Trump left the Oval Office.

But Trump keeps busy being Trump–kicking @ss and taking names–he doesn’t give a rat’s heinie about what the Four Horsemen of the Tech-Apolypse continue to try in order to erase his presence (good luck with that); they’re getting sued anyway. Trump continues to meet with Republican leaders at Mar-a-Lago, and endorse candidates who represent the America First agenda; so he is also not concerned about how the RINO parade views him.

He’s working on primarying them anyway.

Trump is definitely making 2024 moves–whether that is to make a run for the presidency, or simply to be kingmaker and have influence over the America First and MAGA candidates for 2022, and those who will run in 2024; especially for the presidency.

The smartest thing Trump did was establish his own social media presence outside of the tech overlords. The statements from his own website are shared far and wide over social media, and much of conservative alternative media. RedState, DC Caller, Sharyl Atkisson, John Solomon, and others all report on Trump’s statements of note. Trump also keeps abreast of current affairs and foreign policy, and weighs in often–would we expect anything less? He is wise enough to know that he is a stark contrast to the debacle that is the Biden-Harris administration. As Trump continues to delineate exactly what he accomplished in his four years, and how it is being destroyed by this current lot, We can hope that all Americans will embrace the need to return to sanity and fight against the destructive, socialist, and woke agendas peddled by the White House.

As my colleague Nick Arama reported, Trump’s statement on Cuba is markedly different than Biden’s. I won’t belabor the latter here, you can check out her commentary.

What I will say is that Trump says more in a paragraph than Dementia Joe says in a 50-minute rambling speech. He managed to knock out not only Biden’s weak tea response, but also former President Barack Obama and his obsequious bend over to the Castro regime. The Obama-Biden administration is fully complicit in the current state of affairs in Cuba, and why the people continue to suffer.

Former President “Oh Boy!” hasn’t even tweeted anything about Cuba, which is… unsurprising.

Here’s what Trump had to say:

Big demonstrations are breaking out in Cuba and Miami in protest of the Communist Cuban Government (although, today there are zero protesters in Cuba–you know what that means!). Don’t forget that Biden and the Democrats campaigned on reversing my very tough stance on Cuba. Remember when Obama attended baseball games with Castros while they imprisoned, beat, and killed the Cuban people. I stand with the Cuban people 100% in their fight for freedom. The Government must let them speak and be free! Joe Biden MUST stand up to the Communist regime or–history will remember. The Cuban people deserve freedom and human rights! THEY ARE NOT AFRAID!

Just like Guatemalans came out to protest Vice President Kamala Harris’ Root Causes Tour, with signs that said, “Go Home”, and “Trump Won”, I suspect Cubans will continue to find ways to rise up and make known who they know is standing with them, and who they’d prefer to speak on their behalf.

It’s certainly not Joe or Kamala.

In other news related to Trump, people are trying to cancel Mel Gibson AGAIN because he saluted Trump at the UFC 264 on Saturday.

Trump continues to cut a swath across all media, especially the ones that have banned him! His imprint in politics only gets weightier, and will always make headlines. We will only see this increase as we near 2024, which is part of his plan.