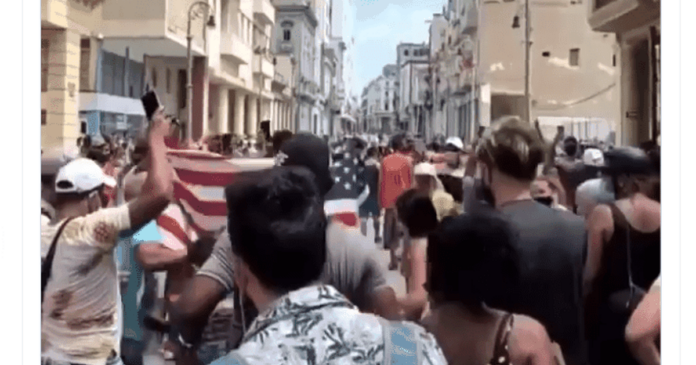 As we previously reported there are thousands out in the streets across Cuba, from small towns to big cities, calling for freedom from the Communist government and chanting “we are not afraid!”

People are saying it’s the largest mass protest since 1959. If you know your Cuban history, that’s the last time the government changed hands — when Fidel Castro took power. So, that’s an incredibly significant thing to say.

Carolina Barrero, a Cuban activist, went even further. “It is the most massive popular demonstration to protest the government that we have experienced in Cuba since ’59,” she said by text message, referring to the year Fidel Castro took power. She called the public outpouring on Sunday “spontaneous, frontal and forceful.”
“What has happened is enormous,” she added.

Our Lady of Charity is taking the lead in one town.

There’s also another powerful symbol that some are waving — the American flag — to them, a symbol of freedom. Imagine if the folks on our left in this country understood that meaning as well these Cubans do.

That shows you this is serious, too. Because waving that can get you locked up for awhile — and they’re not afraid.

An order went out to the police to crackdown and shut the protesters down, according to reports.

But that’s not going particularly well. The people are fighting back, in some places overwhelming police and chasing them away.

In this one, maybe the best video of all, the police are still there surrounded — and do nothing in response.https://twitter.com/albertodelacruz/status/1414374990053576704

In at least one case, the police are seeing the writing on the wall and joining the crowds. That’s pretty amazing, all by itself.

How are Twitter and some in media reporting this? Upset with food shortages and COVID. They’re leaving out how this is anti-Communism and calling for the fall of the regime.

Joe Biden has been silent, while a variety of Republican politicians have tweeted their support for the Cuban people.

Remember the scene in “The Godfather,” where Michael Corleone was in Cuba and he told Hyman Roth how he knew that Castro could win in 1959? Because the protesters were unafraid and willing to give their lives. Now, look at this video and realize something like that is happening across Cuba today.