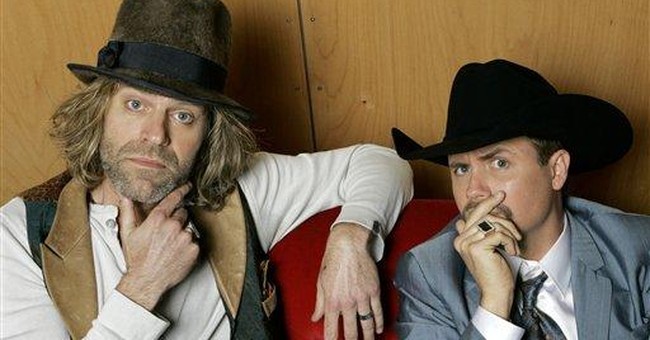 How liberal is the sphere of country music?

And do the audience and industry now have little in common?

That’s indeed the state of things, according to the genre’s John Rich.

The star recently appeared on SiriusXM’s Breitbart News Saturday podcast to comment on the condition of country.

“The industry” he began, “is…I can’t give you a percentage, but let’s just say the majority is very liberal.”

“They’ve been that way for a long time,” the singer said.

Many surely recognize John from his success with Big and Rich. The duo formed in 2003 and earned ten charting singles, including the Number One “Lost in This Moment.”

But perhaps fewer are aware Rich was a member of hit group Lonestar from 1993 to 1998, during which he played bass and performed lead vocal duties alongside member Richie McDonald.

The guy’s been around. And in his opinion, there’s a great divide between the folks in the stands and the suits behind the product:

“It’s interesting that the industry that puts out country music doesn’t really align with a lot of the audience.”

“A lot of folks that listen to country, and again, I can’t give you a percentage, but I can tell you a majority of the audience probably leans conservative.”

“So you’ve got this gulf,” he explained. “Over the years, the industry has never really come out…strongly about their liberal edge…until recently, maybe in the past six to 12 months.”

It would certainly mark a radical turn.

In 2003 on a European stage, Dixie Chicks lead singer Natalie Maines made a derogatory remark about President George Bush.

At the time, the industry Powers That Be didn’t do much to come to the Chicks’ aid.

Concerning current artists, John suggests the political evolution hasn’t yet taken that component of the community:

“They’ve started coming out more and more, and the problem you get is, if you’ve got artists that are conservative but their record label, their publicist, their manager, a lot of the radio stations are being overseen by liberals.”

“We (conservatives) used to be able to…say what we wanted to say and still get our music played,” he lamented, “but that’s not really the case now.”

They could certainly say a lot before: Consider Toby Keith — the man who, in the 90’s and 2000’s, stood as a very vocal proponent of conservative patriotic values.

In 2003, Toby had a well-publicized feud with the Dixie Chicks.

Early this year, he was awarded the National Medal of the Arts by President Trump.

As noted by The Hill, in 2017, he remarked, “I don’t apologize for performing for our country or military.”

Is country music destined for fewer of those sorts of statements?

Will the ones on offer receive company support?

Apropos of that, Breitbart singles out a song:

Asked how conservatives such as [John] can beat this woke leftist shift in the country music industry, [John] pointed to Aaron Lewis’s recent patriotic anthem “Am I the Only One” as an example of the gap between the industry and audience. Despite skyrocketing on the charts and streaming platforms, the industry has completely ignored the song, which slams left-wing activists, including those who tore statutes down during the Black Lives Matter riots in 2020.

“[Aaron’s] out there topping all these charts yet the country music industry won’t back him up. Radio won’t play him. So what does that tell you? Does that tell you what I’m telling you right now about how where the industry sits and where a lot of the artists and audience sits are in two different places-is that a correct statement? Yes it is a correct statement. It’s where it is right now.”

“Everybody’s got to stand up on their own two feet and not be afraid to express their opinions about what they see in the country.”

As for Toby Keith, judging from the lyrics of his recent “Happy Birthday, America,” I’d say he’s less than optimistic:

Without the helping hand of God, your days are numbered, my old friend

We’re sure gonna miss you, girl …