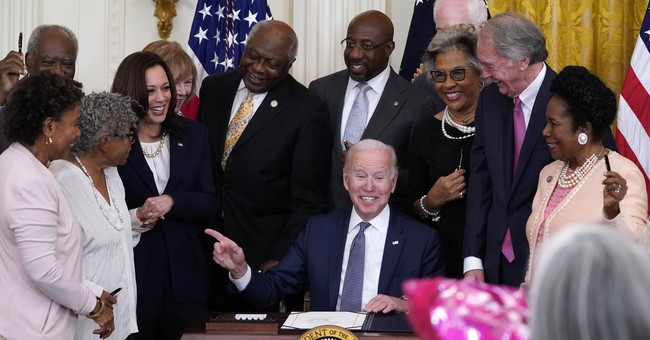 Democrats are not giving up on the For the People Act, their currently-failing attempt to federalize elections, removing many safeguards states currently have. House Majority Whip and Rep. Jim Clyburn is sounding the alarm for his party on that front, claiming that if the filibuster is not nuked, they will lose the House in 2022.

In the process of making his protestations, it sure seems like Clyburn admitted that his party can’t win in 2022 without rigging the election.

South Carolina Rep. Jim Clyburn, one of President Joe Biden’s top congressional allies, is urging him to push for major changes to the Senate’s filibuster rules — because without swift passage of the Democrats’ election reform bill, the party “can kiss the majority goodbye.”

“I don’t care whether he does it in a microphone or on the telephone — just do it,” Clyburn, the House Majority Whip, told Politico Saturday.

I’m pretty good at speaking Democrat, so it’s not hard to figure out exactly what he’s saying. According to Clyburn, unless he and his colleagues get their federalized takeover of our election system, legalizing ballot-harvesting, mass mail-in voting, banning vote ID, and publicly financing campaigns, they cannot win. That’s a very enlightening admission, given we’ve all been assured that the prior voting system used in 2020 is so beyond reproach that it’s downright dangerous to “democracy” to even question it.

Democrats want to have it both ways. They want to simultaneously claim that the last election was absolutely perfect, while at the same time claiming our current election laws are completely insufficient and must be overhauled. But none of this is actually about making things better. Rather, Democrats want to throw as much sand into the gears of the process as possible, making things so opaque and untraceable that they are installed as a permanent majority. Personally, I think their assumptions about future victories, even if they got their “reforms,” are naive and ignore the ability of the other party to adapt to change. Regardless, that’s their thinking.

While some may quibble with my use of the word “rigging” in relation to what Clyburn is stumping for, I do consider ballot-harvesting, electioneering, and not allowing voter ID as pretty obvious attempts to influence the outcomes of elections far past simply putting one’s message out there.

So, why would Clyburn announce this to the world? Perhaps he truly thinks this kind of hysteria will move Joe Manchin and Kyrsten Sinema. Yet, it’s just as likely that Clyburn sees the writing on the wall. Republicans are heavily favored in 2022 to retake the House no matter what. By claiming that such a victory would be predicated on the failure of the For the People Act, Democrats are already prepping their big excuse. In other words, after almost a year of losing their minds at anyone who dares to question the 2020 election, they are preparing to claim the 2022 election was rigged. Ironic, right?

Of course, it’s fine for Democrats to claim elections are fraudulent, whether directly or via non-existent “voter suppression.” The media will even back them up on that idea. Given that, there’s certainly no risk in Clyburn saying the quiet part out loud.