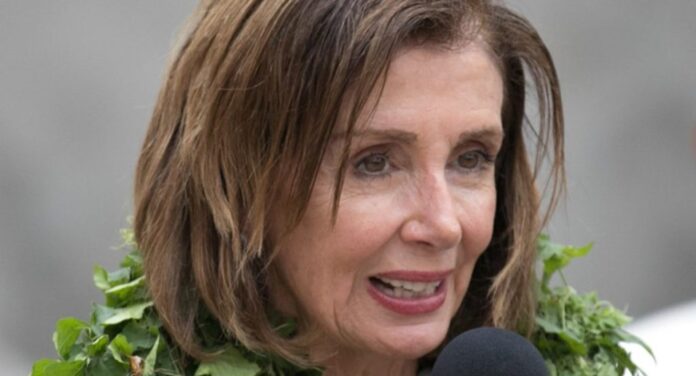 As you likely know, President Donald Trump officially made history on Wednesday by becoming the first and only American president to have been impeached by the House of Representatives twice – and in less than a year. I do not doubt that House Speaker Nancy Pelosi and her band of cohorts who led this second witch hunt are likely quietly thrilled with themselves at the moment.

However, I must also note that in going through with it, Pelosi has made quite a joke of herself… and not only because of the laughable charade that the impeachment was and is.

As it turns out, Pelosi, in giving her opening remarks to being the impeachment proceedings on Wednesday, proved once again that she can’t be trusted to follow her own rules. No, this time, she was not entering a hair salon that was supposed to be closed or caught without a mask.

Instead, she spoke to the assembly using not so gender-neutral language.

She said, “I stand before you as a wife, a mother, a grandmother, a daughter, a daughter whose father proudly served in this Congress…”

Now, it may not seem like there is anything wrong with beginning a speech like this. In fact, I rather enjoy being able to connect with a speaker who makes themselves relatable.

But according to Pelosi herself, this kind of talk is offensive and should not be used, especially when the House is in session and “working.”

The rule is a relatively new one, as it was just proposed at the beginning of the month, with the newly elected 117th Congress’s start.

As is common when a new Congress convenes, a few “house” rules are gone over with some changes being made. One such transition this go-round is mentioned on page 5 of the new regulations and includes an entire section on “gender-inclusive language.”

Essentially, the rule bans gender-specific words like “seaman” and “chairman” or “chairwoman” and states that terms such as “seafarer” or “chair” be used instead.

But the text also maintains that words including “father, mother, son, daughter, brother, sister, husband, wife, father-in-law, or mother-in-law” and so on are to be prohibited. Instead, House representatives are to use terms such as “parent, child, sibling, spouse, or parent-in-law.”

Basically, anything that denotes a specific gender has been banned from use within House sessions. Even the terms niece and nephew are no longer allowed.

Quite naturally, the new rule has been labeled as one of the most “stupid” ever to be issued.

House Minority Leader obviously opposed the rule, tweeting out, “This is stupid. Signed, – A father, son and brother.”

Even former Democratic Hawaii representative Tulsi Gabbard criticized the rule, saying that at a time when there are much bigger issues to deal with, the House wasted their time making up rules that won’t matter to any American in the long run.

Gabbard told Fox News, “Their first act as this new Congress could have been to make sure that elderly Americans are able to get the COVID vaccine now alongside front-line health care workers… But instead of doing something that could actually save people’s lives, they’re choosing instead to say, ‘Well, you can’t say “mother” or “father” in any of this congressional language.’ It’s astounding.”

As a part of Congress, this group has the means to make profound changes for our nation’s betterment as a whole, even saving actual lives, as Gabbard so wisely pointed out. And for their very first act as this year’s acting Congress, they chose rather to blather on about banning certain words that might offend someone.

Let me just say that if some Congress member can’t handle hearing the words like mother, father, sister, brother, etc., they probably shouldn’t be in Congress. I mean, grow up already.

But what’s even worse is that they have turned what used to be one of America’s greatest strengths into a weakness.

As Americans, we used to be proud to be from a nation that accepts all, that takes our great blend of backgrounds, races, religions, viewpoints, and genders and uses them to grow and learn from one another. For decades, we proved that those differences could be used for good, to teach each other life lessons.

And yet, this Congress would like to wipe every one of those differences out, essentially erasing any sort of individuality we have.

Let’s just say it’s not a very good look for a party that is supposed to be the champion of identities.