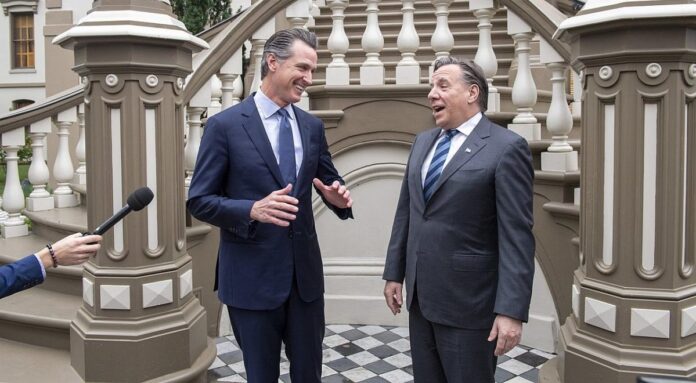 Left-wing Governor Gavin Newsom of California is sweating it — and on the run.

The COVID-19 lockdowns have sparked a mass movement against the governor as small businesses and jobs are getting crushed. People are furious.

The trends pointing to California’s crack up have been long-running. The Golden State of California isn’t as golden as it used to be.

While the weather is still great (75 and sunny, when there’s not choking smoke from wildfires or toxic smog from Biblical traffic jams), the rest of the state is busy crumbling into the Pacific Ocean.

Middle-class taxpayers are fleeing to states with lower taxes, such as Arizona, Texas, and even Colorado. With the highest income tax rates in the nation — and a slew of other taxes from sales tax to property tax to all of the miscellaneous fees that California residents are hit with — anywhere BUT California is a good option if you seek lower taxes.

The crown jewels of Silicon Valley, too, are fleeing California. You know, the companies that create jobs and pay taxes so that California can afford to spend exorbitant amounts of money on “green” infrastructure boondoggles and give illegal immigrants free health care. Elon Musk, founder and CEO of Tesla, has moved his residency to Texas. The software company Oracle and Hewlett Packard Enterprise, an offshoot of computer maker Hewlett Packard that makes servers and networking devices, have also announced their move to Texas.

While some states – such as Florida or South Dakota – took measures to keep their economies open, thereby saving millions of small businesses and jobs, California took a decidedly different approach.

The endless lockdown approach of Gavin Newsom has been bewildering, senseless, contradictory, and flat out mad. Par for the course if you’re of the Radical Left, but incomprehensible in its stupidity for the rest of us.

Making an art of “do as I say, not as I do” Gavin Newsom has shut down restaurants to the public, only to then be caught on camera eating at a restaurant without a mask and no social distancing, as he got chummy with lobbyists no less at a pricey northern California restaurant called The French Laundry.

If the governor wants to support businesses, great. But don’t ban them for the rest of us and then go nosh with lobbyists in a room that is populated well above the safety guidelines the governor’s health department has dictated.

All we ask for is some basic consistency. But even that is too much for liberals. The only thing they are consistent in is their hypocrisy.

Small businesses across the state are getting crushed. And even though they should probably vote Republican, there are plenty of Democratic business owners in California who are ripping pissed that the governor is suffocating their livelihood with his erratic and endless lockdown decrees.

Employees, independent contractors, and workers are mad, too. California has the highest unemployment in the country.

For all of the above reasons the petition to recall Governor Gavin Newsom is gaining traction.

Governor Newsom has a lot to fear in the swelling recount effort with nearly a million signatures already collected and Democrats are starting to abandon the governor in droves, with even key members of Newsom’s staff hitting the exits before they go down with the sinking ship.

With the petition effort already 2/3 of the way to its goal, the Democrats aren’t just getting worried — they’re getting DESPERATE.

The chair of the California Democratic Party held a press conference this week calling the campaign to recall Gov. Newsom a “coup.”

“This recall effort, which really ought to be called the California coup, is being led by right-wing conspiracy theorists, white nationalists, anti-vaxxers in groups who encourage violence on our democratic institutions,” said Rusty Hicks, chairman of the California Democratic Party. “Today we’re here to say enough is enough is enough.

Oh, the bottomless lies that the Democrats tell themselves that probe the depths of depravity.

News flash: the recall effort of California’s left-wing governor has support across the spectrum of party affiliation with progressives, democrats, republicans, and independents alike supporting the removal of Gov. Newsom from office.

The destruction wrought by the hard-headed idiocy of Gov. Newsom is bipartisan.

Also, another news flash: the recall process is legally prescribed by the Constitution and statute – AND CERTAINLY NOT A COUP.

Left-wing Governor Gavin Newsom is on the run in California.

It looks like California may have finally reached its maximum threshold of left-wing insanity. That theory will soon be put to the test if a recall is triggered — an event that looks like it’s on the near horizon.