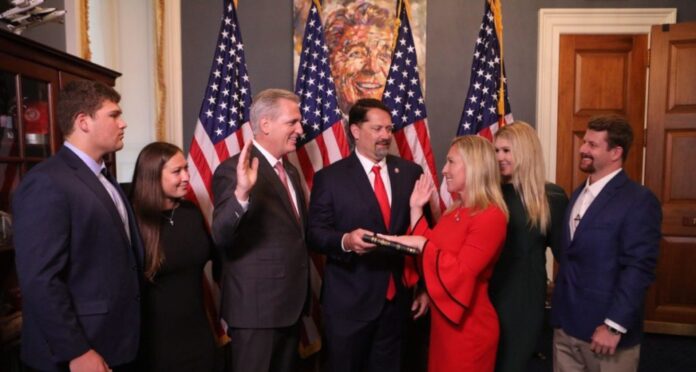 Unity? Yeah, that’s not going to happen. There are too many GOP members of Congress that are worked up over the fact that Trump was impeached not once but twice. Rather than accept what has happened and move on, it’s going to become a tit-for-tat war on Capitol Hill.

Is Biden guilty of things that are of an impeachable offense?

Maybe, possibly. There are questions as to what happened in Ukraine while he was Vice President. There are also questions about how much his son Hunter has been involved in.

Representative Marjorie Taylor Greene (R-GA) is looking at impeaching Biden. He hasn’t gotten into the office just yet, so nothing he’d be impeached for would be based on his presidential actions. However, there may be enough based on the time he spent as VP.

Is this what the country needs to heal? Absolutely not. Further, impeaching Biden only leaves us with Kamala Harris as the president. Considering that she’s more liberal than Biden, giving her the keys to the kingdom isn’t the best idea.

Greene has already tweeted that she plans on filing Articles of Impeachment on Joe Biden on January 21 – one day after Biden is to be inaugurated. She has said that she’s proud to be the voice of Republican voters who “have been ignored.”

75 million Americans are fed up with inaction.

It’s time to take a stand.

I’m proud to be the voice of Republican voters who have been ignored. #ImpeachBiden#QuidProJoe #BidenCrimeFamily pic.twitter.com/E83s1iOoVF

According to Greene, Biden is guilty of abuse of power. She tweets that there are 75 million Americans that are fed up with inaction. She uses hashtags such as #BidenCrimeFamily to show that he’s just as corrupt as many believe that he is.

Greene is probably not the voice that we want. She doesn’t speak for the majority of the GOP. She’s been considered a fringe. She’s just as far-right as AOC is far-left. Every now and then, there’s a fringe Representative that ends up gaining a reputation for conspiratorial views – and Greene is one of them. She also has a reputation for promoting many of the same bigoted and conspiratorial views as QAnon.

Most of the GOP are ready to go back to work. They’re willing to work with Biden and they’re going to do their best to fix what the country needs – a working economy.

The only thing that Greene will end up doing is creating a bigger divide. While she has valid points of fighting for what is right, her extremist views are only going to drag the GOP down. Further, the last thing we need within the Capitol is another impeachment ordeal – one that could take the emphasis away from the legislation that really needs to be passed.

There’s also something important that Greene is forgetting – the GOP doesn’t have the majority. In order to get the Articles of Impeachment passed, there would need to be a majority in the House. The likelihood of getting any Democrat to vote in favor is almost nonexistent. Even if by some far cry that it was pushed through, there wouldn’t be enough to get him out of the office with a Senate majority of Democrats.

Greene needs to take a seat. She needs to focus on what’s really going to help Americans. She should focus on being a voice for the northwestern part of Georgia, which is where the 14th Congressional District lies.

As for impeaching Biden, if he’s truly guilty of abusing his power, it will only be a matter of time before he abuses it again. So, we’ll sit by and wait. We also have to be overly cautious because placing Kamala Harris is a dangerous one – and the Democrats would be eager to see what she could do as president.

Somehow, with all of the political discord, the GOP and the Democrats have to find some common ground. The country has to heal before we tear it apart once and for all. Impeaching Biden is a nice thought, but it’s not the right move. At least not right now.