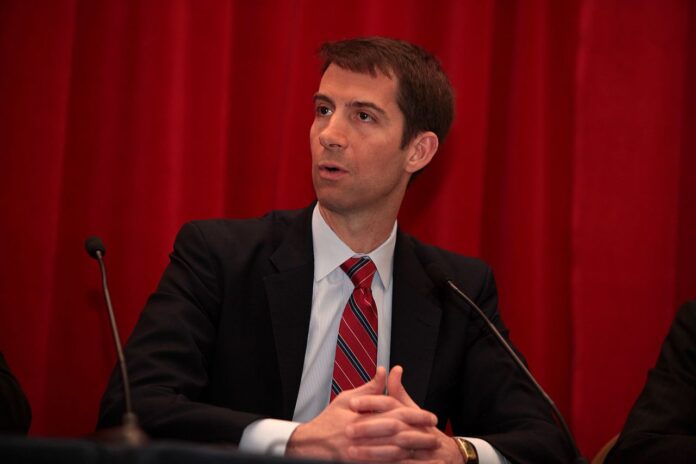 Sen. Tom Cotton (R-Ark.) took issue with a news story from the New York Times that was printed over the Independence Day weekend. The article was about the divisiveness of the United States flag, with stories of how displaying the flag has become a symbol of divisive political affiliation.

Sen. Cotton appeared Monday on “Fox & Friends” and went after the newspaper for their story. He criticized the rhetoric that indoctrinates Americans to believe we should be ashamed of the symbols of “our heritage and our founding principles.”

The story in the New York Times, posted on Saturday, was titled: “A Fourth of July Symbol of Unity That May No Longer Unite.” There were stories of people who perceived the flag is closely affiliated with Trump supporters and how that impacted their businesses. They said it also impacted their friendships and family relationships.

The Times reported that the flag has had several meanings over the last nearly 250 years.

“Raised at Iwo Jima, it was a symbol of victory,” the paper noted. “Lit on fire, it became a searing image of the protests against the Vietnam War. Ribboned around the twin towers on commemorative Sept. 11 lapel pins, it is a reminder of the threats against a delicate democracy.”

The newspaper went on to describe a change that is looming regarding the flag and those politicians who wrap themselves in it.

“Today, flying the flag from the back of a pickup truck or over a lawn is increasingly seen as a clue, albeit an imperfect one, to a person’s political affiliation in a deeply divided nation.

Supporters of former President Donald J. Trump have embraced the flag so fervently — at his rallies, across conservative media, and even during the Jan. 6 assault on the Capitol — that many liberals … worry that the left has all but ceded the national emblem to the right.

What was once a unifying symbol — there is a star on it for each state, after all — is now alienating to some, its stripes now fault lines between people who kneel while ‘The Star-Spangled Banner’ plays and those for whom not pledging allegiance is an affront,” according to the paper.

Now, what once, and should continue, uniting us has made even our Independence Day celebrations polarized. The Times said that there is “another cleft in a country that seems no longer quite so indivisible, under a flag threatening to fray.”

Sen. Cotton went toe to toe with the left-wing activism that he said has been allowed to “march through our cultural institutions” and “indoctrinate our kids,” which is exactly what the Times story reflected.

“Over the weekend, you saw the New York Times running a long story about how the flag, for goodness sake, is now a divisive symbol for many Americans,” Cotton said. “Look, we should be proud of our heritage and our founding principles.”

“Two hundred and forty-five years ago this weekend, our Founding Fathers declared our independence not just because of local grievances over taxes or the quartering of soldiers, but because they wanted to found a new republic dedicated to the proposition that all men are created equal, as Abraham Lincoln said at the Gettysburg Address,” he continued.

Sen. Cotton admitted that we haven’t always achieved our principled goals, but our history has proven that we struggle to realize those ideals. The senator referenced Dr. Martin Luther King’s “I Have a Dream” speech in which he repeatedly invoked the Declaration of Independence and explicitly said that our work is the full realization of America’s founding principles.

Cotton said that we should be teaching our children to be proud of and celebrate the traditions in America.