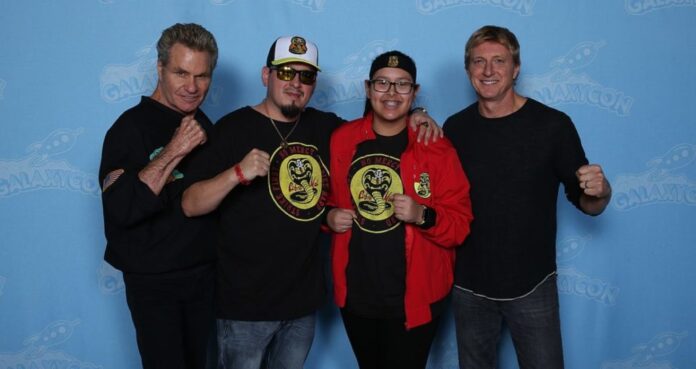 Why is it that everything has to be about race? Why can’t there be entertainment available to anyone and everyone?

It’s not about racism – it’s about how different people of different backgrounds respond to different programs.

Cobra Kai is on its third season on Netflix. It’s the continuation of the Karate Kid story. More than 40 million households are tuning in – and it’s hardly all white.

Cobra Kai has actually been in the “Top 10” for 85 countries according to the streaming service. 85 countries – it’s most certainly not too white in order to get these kinds of statistics.

However, there’s a problem in our country. The far-left liberals that are all “woke” can’t stand that America is coming together over a TV show. Young and old generations alike are falling in love with the show.

There are the 80s kids that remember watching Mr. Miyagi. Then, there’s the new generation that loves the show for all that it has to offer.

The show is a great way to teach about bullying, growing up, and learning to defend yourself with honor. The casting has done a great job, too. There’s diversity with White, Black, Latino, Asian – you name it and they’ve got it.

It’s really hard to poke at Cobra Kai and say that it isn’t “woke” enough. It’s just enough woke to become such a hit show. And everyone’s talking about it.

Therein lies the problem. The anti-art Nazis can’t possibly allow a show to remain on if it’s going to unite people. We don’t need Biden to unite us – just give us more episodes of Cobra Kai and let Johnny Lawrence, Daniel LaRusso, and John Kreese fight for good and bad on our behalf.

Too many of the liberals want to cry about things that may hurt someone’s feelings. They’ll bully brands into becoming more woke. And they’ll divide us using anything and everything they can by drawing attention to the smallest of things.

Are we really as racist as some of the liberals want to make us out to be? Absolutely not.

Cobra Kai is one of those shows that give us something in common. We can enjoy it and talk about it on social media. Racial lines? What racial lines. All is forgotten when we have things we can talk about that has nothing to do with politics.

Cobra Kai isn’t the only thing we have in common with other Americans, regardless of race or color, either. Video games, music, comic books, and more are doing a great job of providing a common thread to bring us together, too.

Some of the woke Nazis are really digging in order to find something wrong with the show. The LA Times has written that the show dares to have “three white men” at the center of the show.

Those “white” men would be the senseis. Another complains that Miguel is the “only main character of color.” Oh, and Daniel is mocked for cultural inappropriation because his commercials “kick the competition.”

The hypersensitivity to the cancel culture has to stop. The only ones helping to divide the country are the ones who want to cancel anything and everything that can help to bring us together as a country.

If Cobra Kai is on the chopping block for being “too white” then there needs to be another argument about Bridgerton, another popular show that incorporates Black people into royal society – something that never actually happened. However, there’s no reason to fight about either show. They’re good. Check out social media – people are talking about these shows regardless of what color their skin is.

Let’s just enjoy the shows, enjoy our conversations, and heal. Netflix can do the work and Biden can even take credit for it.