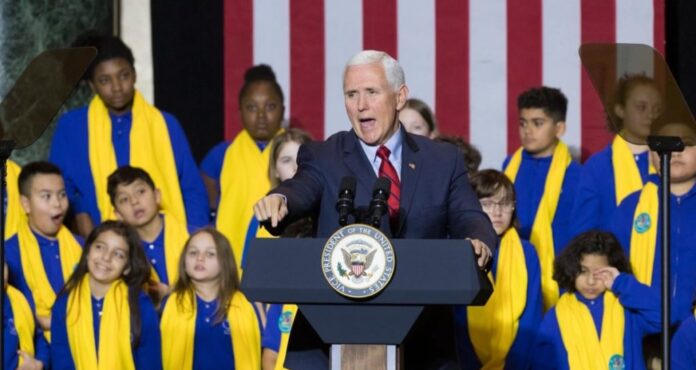 The House currently plans to vote on a resolution that will allow Vice President Pence to invoke the 25th Amendment, thus removing President Trump from his post. There was just one problem with their plan. Speaker Pelosi has received a letter from Pence, stating that he has no interest in going along with this idea.

“I do not believe that such a course of action is in the best interest of our Nation or consistent with our Constitution,” said Pence. “Last week, I did not yield to pressure to exert power beyond my constitutional authority to determine the outcome of the election, and I will not yield to efforts in the House of Representatives to play political games in a time so serious in the life of our Nation,” he continued.

“Invoking the 25th Amendment in such a manner would set a terrible precedent,” according to Pence’s dispatch.

JUST IN: In a letter to House Speaker Nancy Pelosi, Vice President Pence said he will not invoke the 25th Amendment, saying it would “set a terrible precedent.”

The House is soon set to vote on a resolution urging Pence to invoke the amendment. https://t.co/hfV0Nt0jvU pic.twitter.com/PGWHeiJ1EH

This obviously goes against the Democrats’ hopes and wishes. Pelosi is being warned against any actions that would inflame the current tensions. The middle ground that he has taken here seems reasonable enough.

The far left does not want to hear any of this reasoning, though. He’s been called a coward and other names that we are not going to repeat. Of course, these names pale in comparison to the harangue he’s received from Trump. The New York Times has more.

“In a series of meetings, the president had pressed relentlessly, alternately cajoling and browbeating him. Finally, just before Mr. Pence headed to the Capitol to oversee the electoral vote count last Wednesday, Mr. Trump called the vice president’s residence to push one last time.

The article went on to mention Pence’s willingness to consult with various legal experts about the vote certification. It did not take long before he came to an obvious conclusion: he could not carry out the orders that Trump had asked for, from a legal standpoint. When the angry mob broke into the Capitol building, Pence was in the building.

A Republican senator later said he had never seen Mr. Pence so angry, feeling betrayed by a president for whom he had done so much,” said the Times. To be very honest, we cannot say that we blame Pence here. He was dealt a bad hand and he’s done the best that he can. Pence was very loyal to Trump and did his best to protect and praise him at every turn. This is how he has been repaid for all of that loyalty.

After spending four years serving as one of Trump’s most loyal soldiers, he has been cast aside without so much as a second thought. He was whipped under the bus, Trump backed over him and then drove the bus back over him a second time. He whipped his supporters into such a frenzy, Pence had to fear for his life. Crowds were chanting for him to be hung and they also want him tried for treason.

This is the sort of talk that Trump needs to be denouncing. After all, Pence still has time to invoke the 25th Amendment if he feels like there is no other course of action. After all, what motivation does he have to remain in Trump’s good graces anymore?

The voter base that he has been spending the past four years courting is currently calling for his head and is blaming him for Trump losing the election.