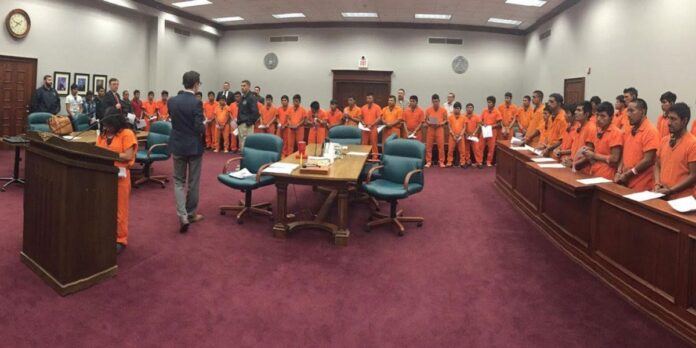 The word “illegal” doesn’t seem to take on the same definition when it comes to the liberals. The United States has strict rules when it comes to immigration. If you fail to follow those rules, you break the law. Therefore, you are doing something illegally.

Most people, when they do something illegally, are punished. That’s just mean. Why should we punish these poor people from poor countries where they cannot support themselves? Shouldn’t we just open our borders so that we can all sing Kumbaya together?

It appears that’s exactly what we might do. Illegal immigrants will be no more during the Biden-Harris administration.

Well, if the Democrats raise our taxes enough, sure. Soon, they’ll make sure that every hard-working American is ensuring that illegal immigrants are well taken care of. We’ll all work just a little bit harder so that the liberals don’t have to feel bad about the immigrants entering the country illegally so that they can escape the cruel countries they’re fleeing from.

Biden’s policy advisers have already met with Raul Ruiz, the Congressional Hispanic Caucus Chair, as well as several other Democratic representatives to discuss an immigration agenda.

An immigration bill is likely to be introduced “immediately.” Most believe that means that there will be a significant amount of amnesty for those who have entered the country illegally. Essentially, they’re willing to turn a blind eye to those who have chosen not to follow our country’s laws.

What’s funny about this is that they, then, expect the immigrants to follow all of the other laws – like don’t kidnap, steal, or murder. ICE will tell you that’s not realistic. Many of those who enter the country illegally continue to commit illegal acts – often three or four times before they get deported thanks to sanctuary cities.

Biden, as usual, isn’t talking. He doesn’t want to share his ideas because he knows that it’s not going to be favored by the majority. So, it leaves people talking about what may happen once he gets inaugurated.

Every president grabs a pen and begins writing executive orders within the first 100 days. These are orders that don’t go through legislation as a way to speed up the process and prevent actions from being contested.

Considering that Ruiz is involved in the legislation possibilities, it is likely going to involve adding millions of foreign workers to the U.S. labor market every year – on a permanent basis. Forget about the pandemic and how there are plenty of Americans without a job. It’s become clear that Democrats want to help those who aren’t American more than those who are.

It is suspected that Biden is going to reverse some of the policies that Trump put into place – you know, the policies that helped to reduce asylum fraud and prevent thousands from entering the country illegally every month.

If Biden gets rid of the “Remain in Mexico” policy, it is likely that there will be amnesty given to over 10 million illegal aliens within the first 100 days.

Why would we want to do this?

Liberals see it as a great way to increase their numbers. Illegal aliens generally vote Democratic. They’ll be included in census counts and add to the numbers for more representatives in Democratic cities like Los Angeles and San Francisco.

If Biden is going to make good on his promises of improving the country, he has to start by making sure that the immigration problem doesn’t get worse. We can’t just provide amnesty to everyone. There has to be a reason to allow them in. If our economy can’t support hard-working Americans at the moment, why bring in millions of unskilled workers?

With Biden and Harris in office, the word “illegal” will cease to exist as anarchy and crime run amok.