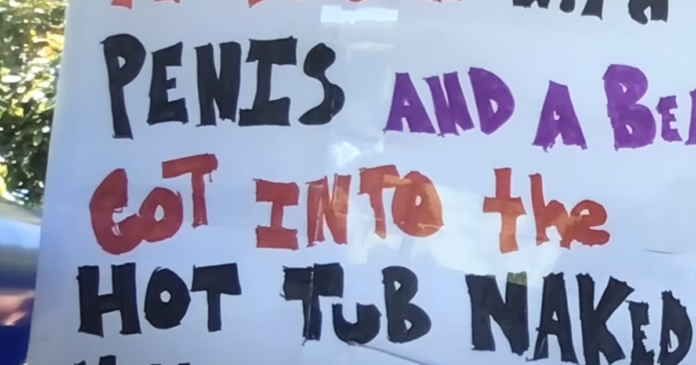 We reported last week about the troubling story about a Los Angeles spa, WiSpa, where an irate woman was complaining about a transgender person with a penis being exposed to women and young girls in the woman’s section of the spa.

The spa didn’t do anything about it because they said they believed that they were required to allow it according to California law.

As we reported, that prompted a protest of the spa over the weekend, as well as a counter-action by SoCal Antifa. The Antifa folks starting attacked several of the protesters, trying to force them out of the area and it deteriorated into a violent mess, even to brawls, with the police having to respond in force to stop the chaos.

There was one guy Antifa ended up not wanting to tangle with because he was covered in tats and he stood up to them, whacking one of them with a huge rosary that looked like a chain when they tried to move in on him. The Antifa weenies ended up having to appeal to the police who appeared to arrest the man, which was hypocritical since Antifa is generally trying to get rid of the police. Except, apparently, when they need them.

The Antifa folks tried to paint the protesters as “transphobes.” But it’s not a good position to take when you’re on the side of defending an adult exposing their penis to little girls.

One of the protesters made a video, detailing how her daughter had someone expose their penis to her in the women’s section of the spa in January of last year. This is a different woman from the original viral video talking about a separate incident this past week. But this woman describing the incident from last year explains in great detail how a naked person with a beard and a penis came where the woman, her six-year-old daughter, and older Korean ladies were — all naked — at the women’s hot tub. The woman explained she was a registered Democrat and it wasn’t about a person being trans but about the exposure to her little daughter and the other women.

What was sad about it, was the woman almost felt like she had to apologize for the perfectly normal feeling of not wanting someone with a naked penis and a five o’clock shadow around her naked six-year-old daughter. No, you don’t have to apologize for that; it’s the people that think that exposure is good who have the issue.

The video shows that it’s not a one-time thing, but a continuing issue there. The spa feels constrained by the law, but the law should be protecting the women and the children. In any other situation, there would be questions about the action being potentially criminal. That’s what Antifa is defending and attacking people over.