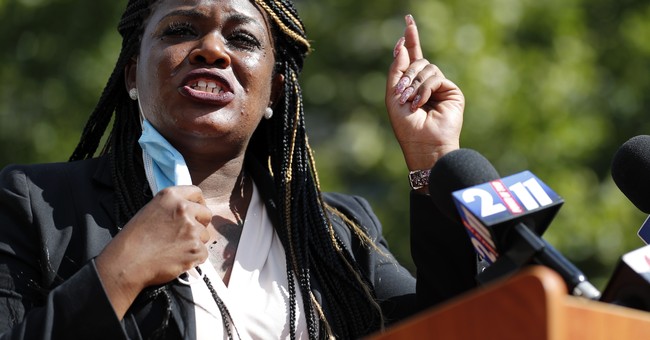 Independence Day is upon us. Around the country, millions of Americans will be gathering to honor the sacred pastime of grilling, eating way too much food, and spending time with family. To normal people, it’s a day of celebration, pride, and remembrance. They pop fireworks, they fly the flag, and they give thanks for the immense privilege they’ve been granted to live in the United States.

Yet, to a growing faction within the country, July 4th represents something evil and sinister. They seek to take the nation’s imperfect founding and destroy it beyond repair. Thus, you get absolutely disgusting, ridiculous takes like the following, this one from an elected member of Congress.

Keep in mind, this is a House member who grew up poor, rose to prominence via her activism, and was elected to office by the voters of Missouri. If anyone is representative of the incredible privilege all Americans enjoy at a base level to better themselves, it’s Bush. Yet, instead of showing any gratitude, she proclaims that only white people enjoy the freedom that July 4th represents.

Of course, when you challenge people with this attitude to explain themselves, they never do. What freedom does Bush lack? Ask that question, and you’ll likely end up being called a racist. Objectively, black people are absolutely free in this country, and though it’s often dismissed, the fact that we’ve had a black president is proof of that.

That’s not to say that everyone has the same starting point, but that’s always been true throughout all of human history, no matter the location. You can not mandate equity in all things. It’s an impossible, utopian pursuit that only ends up lowering everyone into misery and poverty.

Besides, the term freedom has an actual meaning. For example, not being rich does not mean you lack the freedom to be rich. Yet, people like Bush try to define freedom in terms of specific results instead of freedom of opportunity. That’s asinine because it ignores that people have agency, and the moment you take agency away from people, you are depriving them of said freedom.

Lastly, her assertion that the land is “stolen” is supremely lacking context and requires an illogically narrow view of history. People have been “stealing” land for as long as humans have walked the earth. Every Native American tribe that possessed land when the Europeans arrived had previously stolen it from someone else. War and the act of conquering was not a new thing invented by “white” people. Nothing about the creation of the United States is unique in that respect. By Bush’s standard, every single nation on earth is evil and should not be celebrated. Is she truly that deluded?

Regardless of the nuances at play, Bush comes across as a privileged, spoiled brat who can’t shut up for long enough to observe something unifying and special, which Independence Day is. For that, she gets the distinction of having the worst take of this 4th of July.