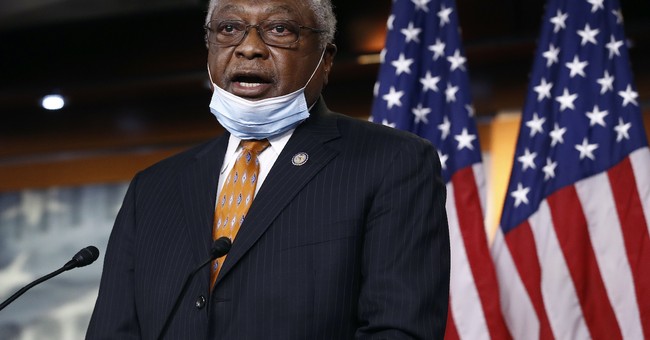 On the latest edition of CNN’s “State of the Union” Sunday, House Majority Whip, Rep. James Clyburn (D-SC) tries and fails to make the case for the Democrats’ dishonest definition of what Americans should have to show to prove they can legally take part in our nation’s electoral process.

Host Dana Bash begins by mentioning Sen. Joe Manchin‘s (D-WV) “plan that requires an ID or a utility bill,” adding that “[s]ome Democrats like Stacey Abrams say they could get on board with that.”

Clyburn is ready to knock down for the completely set-up question of whether he would, too:

As the set up to the question shows, he’s not the first member of his party to push this ‘nuanced’ definition of voter ID — it’s also part of both activist and Georgia election loser Stacey Abrams’ and Georgia Sen. Raphael Warnock’s flip-flop on the issue, which my colleague Sister Toldjah wrote about recently. She also mentioned that their two-pronged strategy includes the lie that Democrats were never against voter ID.

Here’s Clyburn with that:

We are always for voter I.D. We are never for disproportionate voter I.D.

But then, he spouts some nonsense about hunting licenses and student ‘activity cards’:

When you tell me that you got to have a photo I.D., and a photo for a student for an activity card is not good, but, for a hunting license, it is good, that’s where the rub is.

I don’t know of a single person who is against I.D.ing themselves when they go to vote. But we don’t want you to tell me my I.D. is no good because I don’t own a gun and I don’t go hunting.

Watch for yourself and see if you can connect the dots any better than I did.

Then there’s the piece de resistance: Clyburn tries the oldest Dem ploy in the book (well, besides, “Do it for the children!”). Here we go again with “they’re trying to hurt grandma!” And of course, equity!11!!!

No, I’m drawing the line at inequitable I.D., any kind of I.D. that you got.

People, if you’re 94 years old, you don’t drive anymore, but you’re still watching the news every day, and you want to keep up, you want to vote, and you don’t have a photo I.D., then you ought to be able to vote with whatever I.D. that you have.

How else would any reasonable person read that than “these people are children and unable to take care of their own lives”? And where is the pushback by Bash or other journalists on something so distasteful? It didn’t and doesn’t happen.

Here’s the problem the Democrats are going to run into with this, like they’re running headlong into a brick wall. As RedState reported in June: polling shows the majority of Republican and Democrat voters want voter ID. Even better, as Brandon Morse, wrote: “What’s emerging is a pattern about voter ID laws. Back in April, Rasmussen found that the majority of black voters don’t believe voter ID laws discriminate against them at all.”

No amount of massaging the language or emotional appeals will change the facts most Americans of every color and creed see in their everyday lives. We’re called a melting pot for a reason. People just aren’t buying what the progressives are selling.