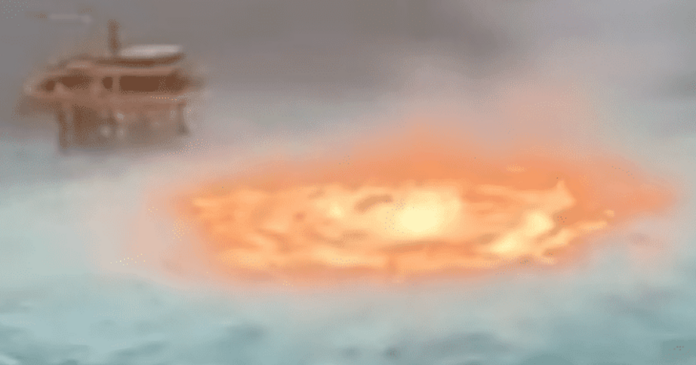 A pipeline in the Gulf of Mexico off the Yucatan peninsula ruptured and caused a massive fire in the water Friday. The incident has now gone viral around the world because of the stunning visuals, showing an “eye of fire” in the water, right next to an oil platform, looking like molten lava. The fire began in an underwater pipeline connected to the platform at Pemex’s Ku Maloob Zaap oil facility. Three boats are supporting the effort to contain the fire.

That prompted a reaction from people on the left going after oil and attacking capitalism.

Here are a couple of samples.

Here’s a British Labour Party member who got beaten by a conservative in 2019, who has a Twitter banner with “Socialism is the future.”

Except there’s a small problem with that argument, kids. You just got burned with your own narrative.

The company behind this is Pemex, a Mexican-state controlled company that formed by nationalizing private companies in 1938. Literally the opposite of “capitalism.” It’s the state seizing the means of production. Pemex also has a long history of “major industrial accidents at its facilities,” according to Reuters.

Not to mention it also has a bad record of pollution, being named one of the top polluters in the world. When the government seizes control, they run things the way government often runs anything — badly. When there’s no incentive to do things better (you know, that whole capitalism thing), you tend to get shoddy work. So, these folks who wanted to gore capitalism just pointed out a great example of why socialism is bad.

Pemex said no injuries were reported, and production from the project was not affected after the gas leak ignited around 5:15 a.m. local time. It was completely extinguished by 10:30 a.m.

The company added it would investigate the cause of the fire. [….]

Angel Carrizales, head of Mexico’s oil safety regulator ASEA, wrote on Twitter that the incident “did not generate any spill.” He did not explain what was burning on the water’s surface.

So. what was burning then? But then, there’s another problem. When the government seizes control of such things, it’s also the government that’s supposed to respond to such errors, which naturally creates an inherent conflict that one doesn’t necessarily have with a private company.

The national company is also in deep trouble financially.

Production has been declining at Ku-Maloob-Zaap as fields mature and Pemex lacks resources to invest in new extraction technologies. Pemex has seen output fall every year for a decade and a half and has the largest debt of any oil major, at almost $114 billion.

But in an example of “everything is connected,” they may have been looking to get money in connection through an unlikely source — Hunter Biden. We wrote about how Hunter was trying to get into a deal with Mexican billionaires, and he introduced them to Joe Biden, who had them to the VP residence when he was there, that Hunter and one of his partners even flew to Mexico with Joe on Air Force Two to work on a “gigantic deal.” At least one of the things percolating was trying to work a deal on “Pemex privatization,” as this email shows.