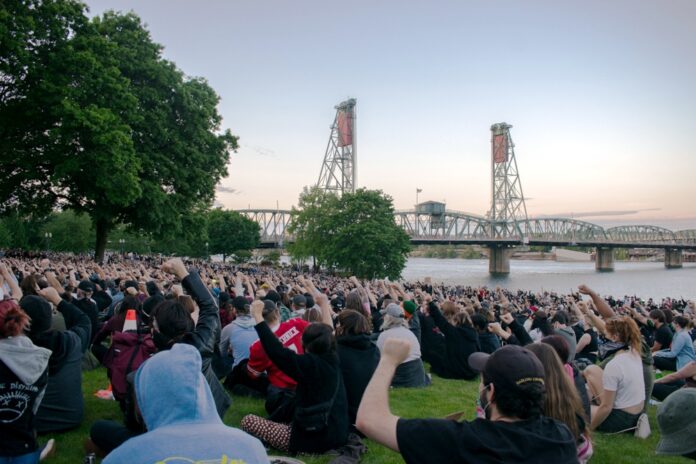 Portland, Oregon Mayor Ted Wheeler finally got a wake-up call from the very people he has been supporting ever since the riots in his town broke out. For months the hateful Mayor supported the people that were terrorizing the city and hurting the people that Wheeler should have been protecting. He got exactly what he had coming to him when an Antifa terrorist hunted him down and punched him in the shoulder.

Antifa terrorists are out in force as the nation transitions to another presidential cycle. Their goal is to disrupt and cause chaos wherever they can. The fact that they targeted a political supporter-only goes to prove that they do not care if a person is liberal or not. They will attack anyone that calls themselves an American.

The Democrats refuse to believe that Antifa exists. It does not matter if the thugs show up in force wearing their traditional black gear or not. The loony left will not admit the group’s existence until the group comes to their world and punches them in the face.

Wheeler’s wake-up call was a reality check for the clueless Mayor. The very people that he has tried to reason with will only listen long enough to rearm themselves. And when they finally have the weapons they need to hurt and destroy, they will return to the streets for more violence.

Democrats never listen to the cries of the afflicted until they join their ranks. For Wheeler, it took a punch in the shoulder to get him to wake up to the threat of violence around him. And, of course, the act of terror only happened at night, where they could not easily be identified.

Antifa is a group that thrives on anger. There is no way to speak with them peacefully. The mysterious part is that these people are citizens by day and terrorists by night. They go to work to make a living and then engage in hateful acts of violence at night.

The person that punched the clueless Mayor has yet to be found. It would just be like Wheeler to dismiss the act of violence as a way of the person expressing themselves. But that is only a thought he has when the violence does not affect him. Liberals look out for number one, which is themselves.

The BLM and Antifa packed mob came after the Mayor at night. The fact that the two groups are working together shows that they are one and the same. One of the terrorists threatened, saying, “You are going to be made to feel like the scum you are. F*ck you, f*ck you, shame on you.”

It is time for the liberals to wake up and stand with Republicans to fight the terror existing within the borders. But that will never happen because the liberals love the chaos unless it directly affects them.

The Mayor’s office stated that On Wednesday evening, during a non-work-related dinner with a friend in a designated outdoor area, Mayor Wheeler was confronted by a group of people. The Mayor had been seated for about five minutes when a group of people began shouting obscenities at the Mayor from the outside of the tent.”

Any other person being yelled at in that fashion would have left just to avoid the conflict. Wheeler proved that he is not that bright as he stuck around to try and dinner out. During the altercation, the terrorists pushed their way in and started batting at the Mayor.

Democrats also love to defund the police. Wheeler is a Democrat, so if he is true to his beliefs, he should not have called the police. His social worker should have diffused the situation. But that did not happen, and the police were called. Once the police showed up, the terrorists ran for their lives.

Antifa and BLM are not civil action groups. They are terrorist groups looking to destroy America. The target areas where they know that they will not get much resistance. And it is these areas that are controlled by Democrats. The Republican Party is the one group that stands for law and order.