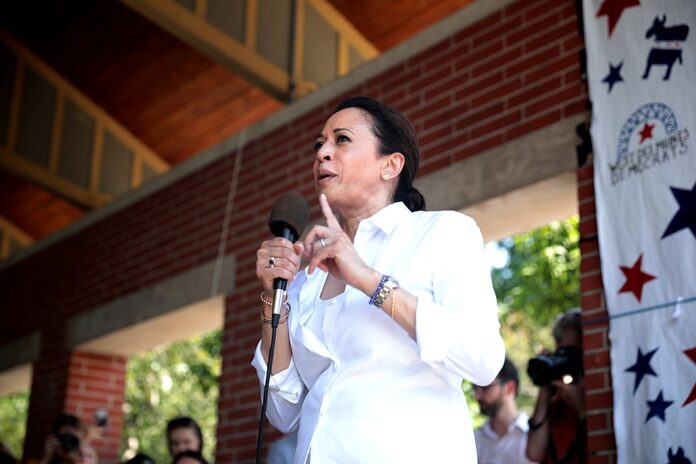 The liberals have shown their true faces. As if we didn’t know already, they’re planning on holding Kamala Harris to much lower standards than they’ve held women of the Trump administration to.

As the First Lady, Melania Trump was constantly criticized for her name-brand coats and bags, her presence of high heels, and her overall level of couture.

There’s no denying that the Vice President needs to be the face of America. He or she should always look their best.

As the first female Vice President, Kamala Harris has to look her best.

Well, that’s going to be a bit hard. Looking her “best” is questionable when Vogue is shoving her onto the cover in a pair of sneakers.

Sneakers with a business suit. Had Melania Trump or anyone else in Trump’s administration ever dreamed of such a fashion faux pas, the liberal media would have sent out the fashion police immediately. However, with Kamala Harris, it is not only accepted but celebrated.

Let’s hear it for the double standards.

Kamala Harris is on the cover of the February Vogue wearing Converse sneakers. Let’s hope that this also doesn’t erupt in a brand war – after all, Nike is supposed to be the controversial sneaker company. They’re the ones that made sure to pay Colin Kaepernick a small fortune for a sponsorship deal after he knelt during the pledge.

It’s only a matter of time before Converse is shoved into the faces of Americans everywhere. It may become “the” brand if you want to show that you’re “woke” and able to support the new Vice President – the first in history to be white and African American, in case you haven’t heard.

Taffeta, really? That was popular throughout the 1950s and 1960s. Many can still recall the sound a taffeta dress makes when walking across the dance floor.

But, we get it. It’s pink. The vice president-elect is a female. It’s a disgusting parade of feminism, but it’s okay when Vogue does it because they’re on the liberal side of the media. Had any of this happened while Melania Trump was being photographed, the progressives would have been poking fun at each and every aspect.

So, we’re supposed to stand back and applaud the cover of Kamala Harris in her traditional ensemble – skinny pants, a black blazer, and a pair of Chucks. The caption under the photo reads: “Madame Vice President! Kamala Harris and the New America.”

Yashar Ali, an independent journalist reported that there were several photos taken of Kamala Harris for the upcoming Vogue issue. Although there was a photo taken of the VP-elect in a powder blue suit with her arms crossed (and shoe choice hidden), Anna Wintour, the Editor in Chief for Vogue, decided to go for the one with Harris in her sneakers.

So, welcome to 201. Fashion is now dictated by a failed presidential candidate who was chosen to be the VP because she offered diversity for Joe Biden’s campaign. The sneakers she wore out of comfort and necessity on the campaign trail are now being toted as the fashion choice for democracy.

Only in liberal media would this be celebrated. For four years, we had to watch as “journalists” poked fun at the impeccable taste of Melania Trump.

Kamala Harris offers diversity. She offers a female angle to the position of VP. Oh, and she’s in sneakers while she does it. Apparently, we’re supposed to be really excited about this. With the pink taffeta hanging in the background, it would have been more impressive to pose her in five-inch heels. After all, if this is going to be a feminist celebration, let’s really layer on the oxymorons.