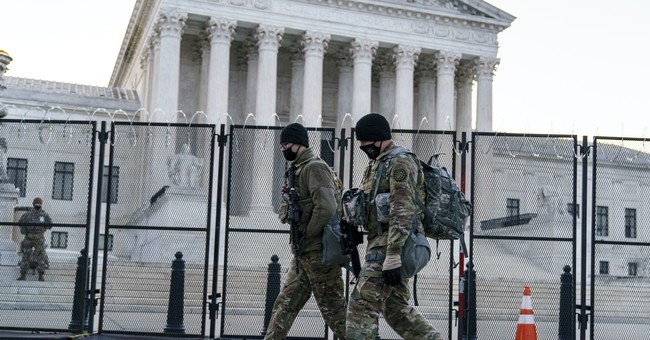 Continuing in their efforts to stigmatize, marginalize, and intimidate political opponents and brand Trump supporters as “domestic terrorists,” the Hologram’s regime recently produced a “National Strategy for Countering Domestic Terrorism.” For all practical purposes, it could have been written by the Soviet Union’s KGB, East Germany’s Stasi, or the ChiComs’ Ministry of State Security, as anyone resisting those totalitarian Communist regimes was considered a domestic terrorist, too.

The Democrat-media complex and their lickspittle RINO allies have been attacking Trump supporters non-stop since the 6 January trespass of Capitol Hill. Democrats are keen on characterizing those who entered the Capitol building as “insurrectionists” and, by extension, “domestic terrorists.” The Democrats have been in bed politically with the Marxist Black Lives Matter movement, and BLM castigating white Trump supporters as white nationalists and white supremacists who have benefited from a systemically racist system is a natural segue to an institutionalized process for dealing with them/us. And they are using the politically corrupt DoJ and FBI to conduct “one of the largest investigations in US history,” with Stasi-like solitary confinement methods to squeeze and prosecute hundreds of participants involved on 6 January.

Finally, Redstate colleague Leslie McAdoo Gordon pointed out the disparate and overly harsh treatment of 6 January trespassers compared to those charged during the Kavanaugh hearings in this excellent piece. As McAdoo Gordon concluded, “It is difficult to see the disparity in the treatment of comparable non-violent misdemeanor cases with similar facts as anything other than a gross abuse of prosecutorial power.” I will add, “for crass political purposes.”

Do you realize how ridiculous it is that the FBI has launched their largest investigation ever into the 6 January trespass while completely ignoring the devastation wrought in 2020 by the real domestic terrorists who infest BLM and Antifa? Their dereliction of duty (BLM and Antifa planned their destruction across state lines, making the crimes federal offenses!) is just the latest indication that the leadership of DoJ and the FBI (at the very least) are thoroughly corrupt. And that there are people who continue to defend DoJ’s handling of the prosecutions of the Capitol Hill trespassers is disgraceful.

As a reminder from a previous article:

The dramatic claims associated with the Democrat narrative that 6 January was an “armed insurrection” that threatened to take over control of the Capitol are being debunked one by one:

Nobody involved carried firearms; even the FBI finally had to admit that.

The rioters did not kill anyone – certainly not Brian Sicknick, the police officer who died from natural causes along with several of the rioters in separate incidents.

The only person killed with a firearm was unarmed Trump supporter Ashlii Babbit, with the trigger-puller yet to be publicly identified.

A long-planned gigantic conspiracy organized and executed the entry to the Capitol building, with the Oath Keepers the main players.

The rest of that article put the lie to DoJ claims that the Oath Keepers perpetrated some kind of giant conspiracy to conduct an armed insurrection on 6 January.

But then Democrat politics have nothing to do with truth, logic, and evidence because the Democrat Party thrives on enemies and fear. Like the good little Commies and Alinsky-ites that they are, they follow Alinsky’s Rule #12 to the letter:

“Pick the target, freeze it, personalize it, and polarize it.”

Targets are political enemies, and fear of what those enemies might do is the emotion that motivates their actions against those targets. And the targets in the Democrats’ crosshair are the 400+ people incarcerated for 6 January actions, and by extension, every other Trump supporter in America.

Make no mistake: The Hologram’s National Strategy for Countering Domestic Terrorism is first and foremost a political document aimed at destroying the MAGA movement and by extension any who resist the Democrats’ America Last agenda.

From the White House “fact sheet” (agitprop through and through):

Under Federal law, “domestic terrorism” is defined as “activities that involve acts dangerous to human life that are a violation of the criminal laws of the United States or of any State; appear to be intended to intimidate or coerce a civilian population, to influence the policy of a government by intimidation or coercion, or to affect the conduct of a government by mass destruction, assassination, or kidnapping; and occur primarily within the territorial jurisdiction of the United States.”

You mean like alleged FBI entrapment associated with the bungled kidnapping attempt on Michigan Gov. Gretchen Whitmer (D-MI)? And weren’t the BLM/Antifa riots in 2020 the very definition of attempts to “intimidate or coerce a civilian population”? Crickets on that from the Merrick Garland Dept of Justice. And are peaceful protests by Trump supporters such as Stop the Steal now construed to be “intimidation and coercion”?

Yeah, right. The Democrats are big on using “experts” to justify federal action on virtually any subject. How’d those “experts” from the intel community do in pushing Trump-Russia collusion? Or the “expert” Dr. Fauci on all of this ridiculous virus announcements over the last 18 months? Or the “experts” at DHS’s Election Infrastructure Government Coordinating Council (GCC) Executive Committee who breathlessly trumpeted that 2020 was “the most secure election ever“? And I don’t remember a single press conference or published memorandum from DHS or the FBI about the ongoing terrorism being perpetrated in 2020 by BLM and Antifa, do you?

The U.S. Government is improving employee screening to enhance methods for identifying domestic terrorists who might pose insider threats. The Office of Personnel Management will consider updates to the forms used to apply for sensitive roles in the Federal Government that could assist investigators in identifying potential domestic terrorism threats. DOD, DOJ, and DHS are similarly pursuing efforts to ensure domestic terrorists are not employed within our military or law enforcement ranks and improve screening and vetting processes.

Yeah, that’s just what we need: a federal bureaucracy that is filled from top to bottom with woke-sters steeped in critical race theory and the cancel culture. Will they implement and monitor a social credit system to monitor the behavior of Americans to ensure conformance with “Democrat values” (sic)? Who will do the screening and on what basis? Will any BLM or Antifa supporter be screened out? Don’t hold your breath on that one!

Every component of the government has a role to play in rooting out racism and bigotry and advancing equity for all Americans. The U.S. Government, in close partnership with civil society, will address the long-term contributors that are responsible for much of today’s domestic terrorism. This includes reducing and protecting Americans from racial, ethnic, and religious hatred.

There’s that equity word again – it’s pure cultural Marxism. Equity means equality of outcome, not equality of opportunity, and the only way to ensure and “advance equity” is by government fiat. Welcome to George Orwell’s 1984 and Aldous Huxley’s A Brave New World if the Democrats aren’t stopped in their tracks! DoD is already hard at it, as previously reported here and here.

Conclusion. The Democrats are hard at it in weaponizing the federal government against their political enemies. To achieve their political ends, they are making common cause with the extremist Brown Shirts and Communists who comprise BLM and Antifa. They seek to criminalize political dissent through bureaucratic means because Congress would never pass legislation containing The Hologram’s National Strategy for Countering Domestic Terrorists into law. The American people would shout it down.

Democrats couldn’t enough votes to set up an “independent commission” to “investigate” the events of 6 January, so Speaker Nancy Pelosi (D-CA) hand-picked her own partisan Democrat star chamber “select committee” instead. Democrats are all political all the time. Stifling political speech through bureaucratic means violates the First Amendment rights of millions of Americans. Nebulously characterizing Trump supporters as “domestic terrorists” through administrative law is an abuse of power. And screening out applicants for federal employment based on Democrat political definitions of domestic terrorism is a travesty.

If the Democrats wish to see what real domestic terrorists look like, they need only look in the mirror.