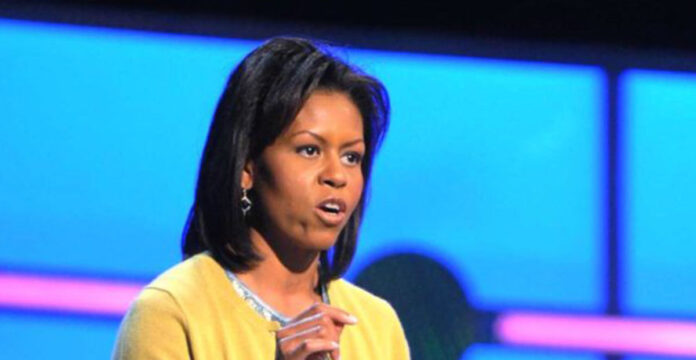 Former first lady Michelle Obama is known to lauds the moral integrity of the party that advocates for abortion, illegal immigration, and the passing of weapons to terrorists. She’s held up as an icon of a movement that spread hatred and racism within the United States borders. All of which she did with perfectly toned arms, fluffy pets, and a slogan of “when they go low, we go high.”

The former Chicago attorney and author of the self-aggrandizing best-seller “Becoming Michelle Obama” seems to have put to the test Adolf Hitler’s mantra that if you tell a lie long enough, people will accept it as truth, in her continued support of Democratic causes. Most recently the leftist darling has been spouting clichè party platform about unity, while simultaneously pushing for those who disagree with her to be silenced.

According to Obama’s statement, which has been widely distributed after she posted it on social media, the former first lady is calling for freedom of speech to be squelched in the face of opposition to her party’s goals:

“Now is the time for Silicon Valley companies to stop enabling this monstrous behavior — and go even further than they have already by permanently banning this man from their platforms and putting in place policies to prevent their technology from being used by the nation’s leaders to fuel insurrection,” Obama wrote in her statement concerning the Republican demonstrations earlier in the week.

Like all of you, I’ve been feeling so many emotions since yesterday. I tried to put my thoughts down here: pic.twitter.com/9xzRvrpk7y

“Seeing the gulf between the responses to yesterday’s riot and this summer’s peaceful protests and the larger movement for racial justice is so painful. It hurts,” Obama said. “And I cannot think about moving on or turning the page until we reckon with the reality of what we saw yesterday. True progress will be possible only once we acknowledge that this disconnect exists and take steps to repair it. And that also means coming to grips with the reality that millions voted for a man so obviously willing to burn our democracy down for his own ego.”

Obama’s hybrid attack and congratulatory statement seemed to not only rub salt in the wounds of Americans, around half of whom believe the election was stolen, and simultaneously add fuel to the fire of those who believe themselves to be winning the war against the supporters of the “bad orange man.”

“Thankfully, even in the darkness, there are glimmers of hope,” Obama said before talking about the Georgia runoff election. “It’s something I imagine Reverend Warnock has preached about before—and I’m still heartened beyond belief that he’s headed to Washington. I’m glad his fellow Georgian, Jon Ossoff is, too, and that together they’ll help give control of Congress back to the only party that’s shown that it can put our democracy above its own short-term political fortunes. I pray that every American, especially those who disagree with them, will give our new Congress, President-Elect Biden, and Vice-President-Elect Harris the chance to lead us in a better direction.

“But make no mistake: The work of putting America back together, of truly repairing what is broken, isn’t the work of any individual politician or political party. It’s up to each of us to do our part. To reach out. To listen. And to hold tight to the truth and values that have always led this country forward. It will be an uncomfortable, sometimes painful process. But if we enter into it with an honest and unwavering love of our country, then maybe we can finally start to heal.”

The high road, apparently, is a much easier path if when you can just shut up those who you would like to be seen as better than. It’s obviously a much easier road to trek when it’s paved with the revoked rights of those who disagree with you.

Burning down the rights of Americans might keep our hands warm for today, but let us not forget that behind every monster is an even bigger one waiting to gobble up whatever stands in the way of controlling the most people. Michelle Obama might be serving her own interests today, but in all likelihood, she’ll be serving someone else tomorrow, we just don’t know who yet.