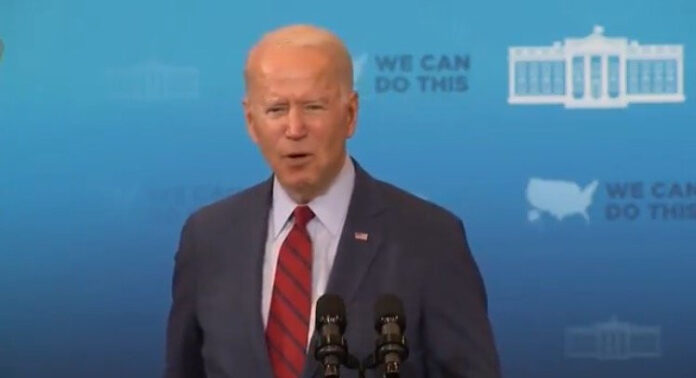 If you ever wanted the perfect summation of the Joe Biden experience, this clip is here to provide it. Biden is the master of attempting to appear woke, while still saying some of the most racist things known to man. It’s really a gift and we wonder why the Democrats continue to allow it to happen.

Then again, the vice president seems to believe that everyone will fall over themselves to praise her because she wears Timberland and does sorority chants. We’re in bad hands no matter who sits in the big chair at this point. This particular snafu was hilarious because Biden gets it started by breaking out a term that woke social media loves: “LatinX”.

Biden was gunning for lots of retweets and shares with this one but he stumbled before too long. He did not even have the chance to take his victory lap on social media. You know that there are few things that Biden loves more than pandering to the liberals.

Once he got this little bit of wokeness out of the way, he stepped in it in a major way. Can you believe that this dunderhead went so far as to imply that every Latino resident who currently lives in the United States is actually an illegal alien? We can but we are sure that his supporters are more than a little surprised.

These remarks took place when he was visiting Raleigh, North Carolina to deliver some prepared remarks on the effectiveness of COVID-19 vaccines. No one told him that once you put your phone down and go outside, most members of the Latino community are offended by the “LatinX” label. That’s because these people live their whole lives on social media.

Biden is taking direction from a bunch of virtue signaling types who live to pander and now he wonders why things have gone awry. This is what happens when you stop thinking for yourself and you allow the far left to do it for you. “It’s awful hard as well to get LatinX vaccinated as well. Why? They’re worried that they’ll be vaccinated and deported,” these were his actual words.

We all know Joe Biden has no clue what “Latinx” even is.

The old, senile racists of the world finally have someone to identify with. This is a group that had long been left in the margins. We are being sarcastic here but we are sure that there really are elderly racists who see themselves in Biden. He bumbles along, acting like he is able to understand what is going on. He couldn’t have less of a clue if he tried.

Who remembers his last bit of racial insensitivity? A few months back, he claimed that Hispanics and African-Americans who live in our inner cities did not know how to use the internet. This is the type of rhetoric that the Democrats specialize in but they try to claim that they are not the party of racists. Instead, they point that dirty end of the stick at the GOP.

Everyone who falls for this ought to be ashamed of themselves. If you are going to point the finger at Republicans and take them to task for everything that is said, Biden needs the same exact treatment. One of these days, he is going to come face to face with the people he speaks so poorly of. That is when his true side will come out and the rage will begin.

Biden always gets mad whenever he is confronted with his own stupidity. We just hope that he stops taking his marching orders from the people who only live inside of his phone at some point. It is high time that he took a long, hard look at how he is handling things. All he is doing now is adding to the oppression of the groups that he claims to want to help. Someone should explain that to him but make sure to do it very slowly or you will lose him!