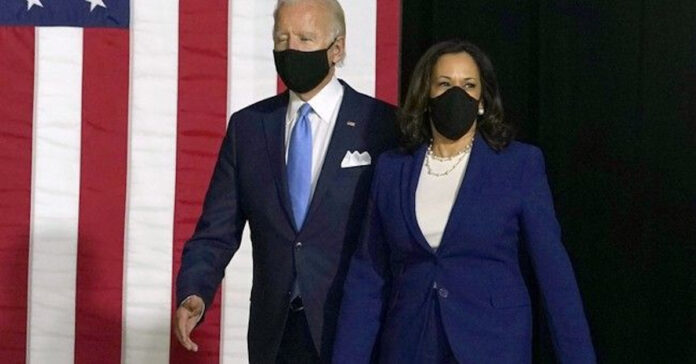 In a not unexpected (and potentially Freudian) slip, former Vice President Joe Biden referred to his running mate, Sen. Kamala Harris as the “president-elect,” a title that has been bequeathed to Biden himself, pending election confirmation.

According to Breitbart News, Biden made the verbal flub on Tuesday during planned remarks on the coronavirus pandemic in his hometown of Wilmington Delaware.

“I hope the president will clearly and unambiguously urge all Americans to take the vaccine once it’s available,” stated Biden. “I took it to instill public confidence in the vaccine. President-elect Harris took hers today for the same reason.”

Harris reportedly received the Moderna vaccine on live television earlier in the day on Tuesday.

Biden reportedly received the vaccine on December 21, just after its announcement. However, even more concerning than details surrounding a likely unchallenged vaccine is the idea that the Biden/Harris ticket could have been a ploy to trick the American people all along.

It didn’t take a genius of political analysis to understand that while Harris didn’t make it out of the primaries with any significant support, she is the much more stable and in control of her facilities of the Biden/Harris pair.

Biden’s constant on-camera mishaps made one believe what was going on behind closed doors, fearing that the Democrat party could have found a way to install their favored leftist progressive. The presumed president-elect began referring to Harris as their front person, even before the election.

In August, Biden said he chose Harris as his running mate because he believes her to be“ready to lead on day one.”

“If @KamalaHarris and I are elected, we’re going to inherit multiple crises, a nation divided, and a world in disarray. “We won’t have a minute to waste,” Biden tweeted at the time. “That’s exactly why I picked her: She’s ready to lead on day one.”

“LMAO. Joe Biden’s pitch to America is ‘vote for me, my VP will take over soon!’” one user said in response to his tweet.

LMAO. Joe Biden’s pitch to America is “vote for me, my VP will take over soon!”

“At least you admit(unwittingly) that she’ll be in charge on day one,” another added.

At least you admit(unwittingly) that she’ll be in charge on day one.

“She’ll be the one leading,” another quipped. “Not you.”

She’ll be the one leading. Not you.

In September, Harris seemed to accidentally reference the “Harris administration” during a virtual roundtable on the economy.

“As part of our Build Back Better agenda, we will need to make sure you have a president in the White House who actually sees you, who understands your needs, who understands the dignity of your work, and who has your back,” Harris said in a five-minute virtual address to the group, according to the Arizona Republic according to Breitbart News.

“A Harris administration together with Joe Biden as the president of the United States, the Biden-Haris administration will provide access to 100 billion dollars in low-interest loans and investments for minority-business owners.”

While it seems apparent to anyone working from a place of objectivity that the Biden/Harris administration will soon become the Harris/???? administration, what isn’t clear is what proof the left has in believing that the American people will put up with the very obvious dupe being perpetrated at their expense.

The American system of government is set up, not with the assumption that it will never be run by bad people, but with the assumption that bad people will always try to take over. Hence, the frequent and highly regarded elections. The blatant circumvention of the will of the American people and general shenanigans at our expense must be challenged. Because as one political commentator so eloquently put it, you can vote yourself into communism, you just can’t vote yourself out of it.