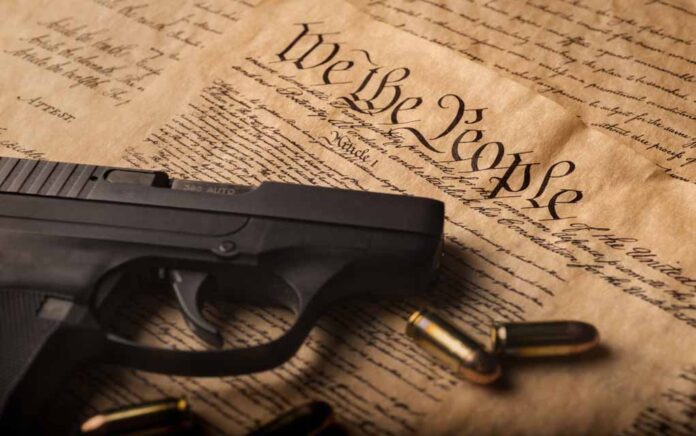 It’s quite normal for community leaders to come together after a tragedy has occurred to find ways to mitigate such future instances. In fact, not doing so would be careless and insensitive in my book.

However, there is a line that cannot be crossed when it comes to certain things, namely the law.

And the Mayor of San Jose, California, just crossed it.

As you may have heard, San Jose became the place of yet another mass shooting two weeks ago when a gunman opened fire at the Vally Transportation Authority light rail yard, leaving nine innocent victims dead. In response, Democratic Mayor Sam Liccardo wisely sat down with his staff to consider ways to ensure that this kind of tragedy doesn’t happen so often in the future.

However, what he came up with is far from a good idea – not to mention unconstitutional, but we’ll get to that part later. First, let’s take a look at what he’s proposing.

Instead of increasing security at the rail yard, or other similar measures, Liccardo is proposing to require all citizens of San Jose who own a gun to 1) buy mandatory gun ownership insurance on that weapon and 2) pay an annual ownership fee for that same weapon.

According to KPIX-TV and a statement made by Liccardo announcing the proposal on Tuesday, “With council approval, San Jose would become the first city in the United States to require every gun owner to have liability insurance coverage for their firearms. Second, San Jose would become the first U.S. city to require gun owners to pay a fee to compensate taxpayers for the public cost of responding to gun violence.”

Liccardo continuing, saying that these gun-control measures would “ensure that victims are compensated where there’s an insurable event. And of course, insurance companies will help us make gun possession safer.”

Now, if you are anything like me, you’re wondering just how expensive this “fee” might be. If I had to guess, it’s probably enough to make just about anyone but the wealthy think twice about purchasing or owning a firearm within city limits.

However, Liccardo says, that is not the goal and that, if the measures are approved, “we will not be imposing fees that are so great as to be prohibitive to ownership.” He states that the purpose of the fee is to help “compensate taxpayers for the cost of everything from emergency rooms to police response” only.

For now, the exact amount of the fee is unknown, as Liccardo will supposedly be sitting down with a “team of experts” in the near future to sort out an appropriate amount.

Then again, according to the executive director of Gun Owners of California, Sam Paredes, Mayor Liccardo’s proposed measures are anything but legal.

Paredes told KPIX, “I strongly believe that Mayor Sam Liccardo is trying to do something he has no authority to do.”

Reason number one for this belief is that the state of California has what is called “preemption” laws that basically stop local governments from passing laws that contradict state-level ones.

What this means is that because California already has its own state guidelines and regulations on firearms, San Jose doesn’t have the authority to overrule those and make its own.

Secondly, Paredes points out that implementing such laws would essentially make criminals out of law-abiding citizens who own guns and pass through the community. He says, “That’s why no other city has successfully done what the mayor is proposing to do.”

And then, of course, there is the matter of federal Second Amendment rights.

As Paredes says, “It is, we believe, very strongly unconstitutional for the government to require law-abiding citizens who are doing nothing more than exercising their Second Amendment rights to be required to have insurance, or to be taxed, while they are exercising that enumerated right.”

And he has a point.

As American citizens and law-abiding ones, we are required to pay insurance on things like vehicles, homes, and even our health. But none of those things are expressly protected by our national constitution, as the right to keep and bear arms is. And that makes any attempt to limit or tax such ownership unconstitutional.

Should Liccardo get these measures approved by the city council in the coming weeks and months, I’m sure that will be proven in a court of law sooner rather than later.