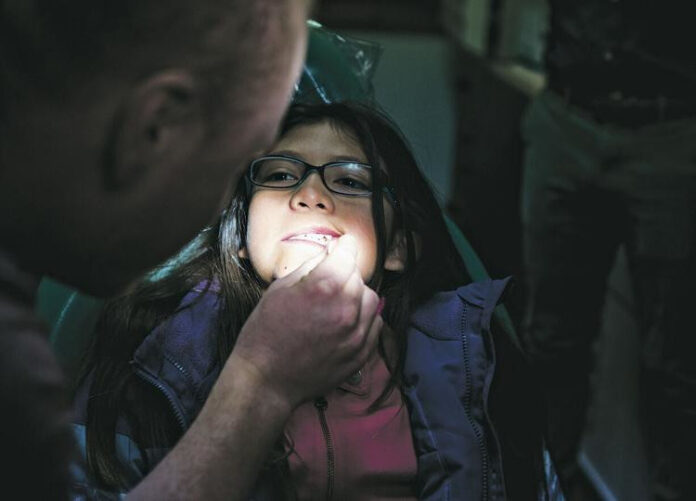 New Mexico’s Democratic governing doesn’t seem to be making it easy for what the rest of the Biden administration has planned. The state has passed new legislation regarding dental exams that may make it harder for students to get enrolled in public school.

Oral health is important – and New Mexico has decided that they are all-in to support it.

A new state mandate will require all new public-school students to have had a dental exam within the past year before being enrolled at the school.

The rule takes effect on July 1 and will apply to new students entering all grade levels K through 12. The dental exam requirement was passed by the state legislature in 2019 as part of a larger dental health bill. According to the New Mexico Dental Therapist Coalition, 25% of elementary school students suffer from untreated tooth decay. As such, the state has decided it’s time to take action.

Additionally, the CDC has identified that dental decay is commonly associated with lower school grades as well as higher absences.

What New Mexico is doing is absolutely necessary. It ensures that students will focus on oral health so that their grades go up and they have fewer absences.

Preschool programs being funded by the state already have the requirement in place, where dental exams must be obtained within three months of enrollment.

A Medicaid and health services coordinator at the New Mexico Public Education Department has said that the goal is to encourage schools to offer support to families. There’s a problem, though…

No money has been appropriated for the various school districts so that they can offer aid to students unable to meet the requirement or to enforce the mandate.

This is going to be a particular problem based on the immigration activities of the Biden administration. New Mexico is a border state, so they are going to have an influx of immigrant students entering their schools – just as California, Arizona, and Texas will.

The school board in Santa Fe has already approved the policy to ensure that they are compliant with the new rule. However, one member, Lorraine Price, raised concerns to point out that there are inconsistencies in dental healthcare, particularly for low-income students. Many oral healthcare programs will focus on the cheapest option – pulling teeth as opposed to saving the teeth with such treatments as root canals and fillings.

Tooth extraction is approximately half the price of a root canal. Price pointed out that insurance or a credit card is needed when walking into a dentist’s office.

It seems that New Mexico may have been too quick to jump onto the new legislation. They haven’t thought everything through, and they certainly haven’t provided sufficient funding.

Price explains that while there are ways to provide for children, what happens once a child has been diagnosed with having a mouthful of cavities? She said, “I don’t want adult teeth pulled from students rather than fillings, crowns, or root canals that need to be done.”

She is speaking like a parent, and it’s a concern that everyone should have.

Various studies have been performed to show that there are inequalities in tooth loss based on both socioeconomic and racial factors.

When Democrats want to focus on socioeconomic and racial disparities on a regular basis, it doesn’t make sense that New Mexico has jumped so quickly to pass this legislation.

While the legislation makes a lot of sense in theory, there are not enough programs in place to provide the necessary support. Children shouldn’t be going into the classroom with a mouthful of cavities but they should also have access to the services that will help them to retain their adult teeth rather than having them pulled.

It’s a typical Democratic move. Make a great suggestion and fail in the execution. New Mexico had its heart in the right place but they have to be realistic about how they can actually mandate dental care, particularly to those who can’t provide for themselves. Maybe the Biden administration can add that to their infrastructure bill, too.