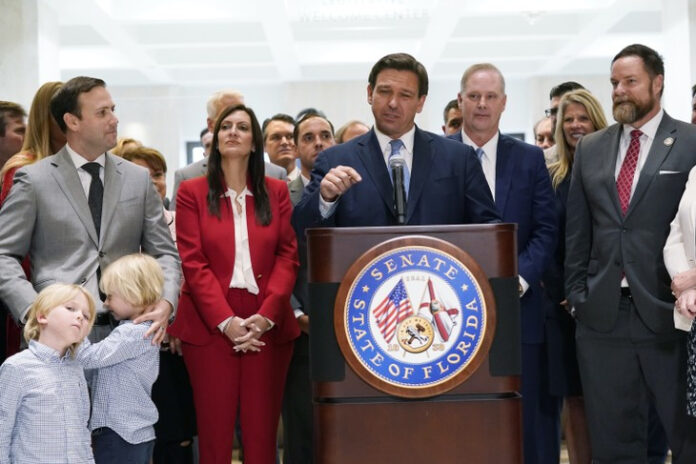 Florida governor Ron DeSantis promised that all business violations of COVID-19 restrictions would be wiped away nearly a month. He is granting clemency to all of these businesses and he did so live on the air with Fox News’ Laura Ingraham. Mike and Jillian Carnevale are gym owners who were victimized by the policy.

They were fined for having all of their outdoor equipment too close together. The fine was referred to as a “total overreach” by DeSantis and he was right. Now, the governor has been able to make good on the pledge. If he can score a valuable victory against one of his closest rivals for re-election in the process? Even better!

Fox News has more about this latest turn of events:

“This action is necessary so that we can recover, have a good transition to normal operations, and also just a recognition that a lot of this stuff was way, way overboard,” DeSantis said.

Democratic candidate for governor Nikki Fried was the only member on the board to oppose the pardons, according to local news outlet Fox 13.

“I voted today to uphold our laws, while our so-called pro-law enforcement governor is actively encouraging people to break the law with politically motivated stunts like this,” Fried said in a statement following a Wednesday clemency board meeting.”

Fried has a sizable amount of support from local government leaders and various mayors. When DeSantis ordered the state to stop collecting any and all fines that were related to COVID-19 violations, there were a number of public objections. MSN has more about the objections and who was raising them:

“City and county officials have expressed frustration at the governor’s efforts.

“It is worth noting that local actions and protocols have helped to keep Floridians safe and healthy, and Ron DeSantis has benefited from that,” St. Petersburg Mayor Rick Kriseman said in a statement back in March.

Dan Gelber, the mayor of Miami Beach, which issued hundreds of citations to people who refused to wear masks, has also called the governor’s efforts “pretty bizarre.”

“Obviously we weren’t imposing fines to make money. We were trying to create a safer environment and save lives,” Gelber said in March.”

To be fair, we are sure that these people were really trying to save lives with these restrictions. However, there is an obvious rejoinder to this idea. The regulations were not having the desired effect and that’s why they needed to go. Masking indoors definitely helped to an extent but it does not serve as a cure-all. It’s a great mitigation tactic that cannot make transmission risks negligible.

By the time the aforementioned gym owners found themselves in hot water, the scientists and policymakers had been proven wrong. So why were they made to pay onerous fines? This is something that did not sit well with Governor DeSantis and he decided to do something about it. It is time that we let you in on a little secret, though.

It’s all political theater! DeSantis and the local leaders are both engaging in their own form of it, if we are being totally frank here. Both sides are playing a game and anyone who is complaining about the governor’s actions now is just mad that they wound up on the losing end.

Fried would do well to learn a lesson from this, especially at this stage of the game. Florida can feel vindicated that their efforts were not all for naught. DeSantis has led the way throughout the pandemic and he has proven that he is not nearly as reckless as he has been portrayed. The mainstream media may have wanted to see him fail but they are going to have to get comfortable. It’s going to be a long wait.