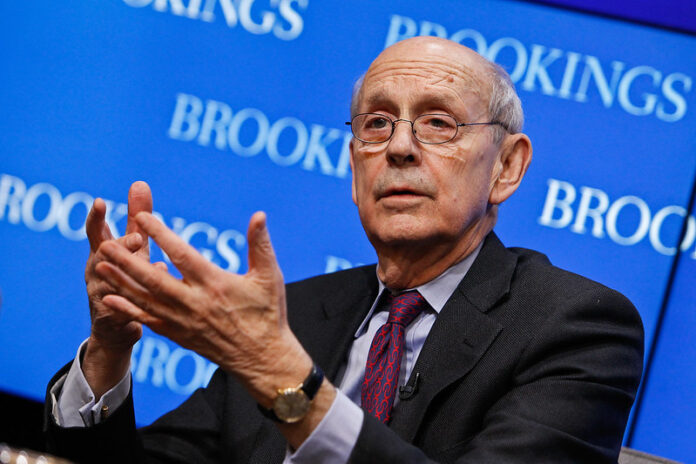 It’s amazing how the Democratic Party is falling apart. Liberals are the ones calling the shots because they’re the loudest. And they’re willing to pick apart their own party in order to drag everyone as far to the left as possible.

No one had an issue with Ruth Bader Ginsburg. She was an icon, and the liberals loved her.

Now, it seems that the liberals don’t feel the same way about Supreme Court Justice Breyer. The pressure for him to retire is unreal – and he’s a member of the Democratic Party.

The liberals are literally looking to replace one Democratic Supreme Court judge with another – but someone who is considerably more left-leaning than Justice Breyer.

Breyer is five years younger than Ginsburg, who actively served up until her death in September 2020. Age is just a number. It’s all about how far to the left Breyer is willing to lean – and it appears that he’s just not as limber as the Congressional liberals would like.

Alan Dershowitz, a Harvard law professor emeritus recently went onto 770 AM radio’s “The Cats Roundtable” to urge members of the radical lift to stop pressuring Justice Breyer to retire. He feels that it will backfire – mainly because Breyer doesn’t want to retire if it looks as though he’s giving in to the pressure.

Even if Breyer wanted to retire, he wouldn’t when the liberals are demanding that he do so. At 82-years-old, he could certainly enjoy retirement. He’s worked enough years to step back and let someone else fill the position.

Breyer has spent 27 years in the Supreme Court. However, the far-left is worried that he could stay in until his death, as Ginsberg did. Since Ginsberg chose not to retire, it made it possible for Trump to name her replacement.

By urging Breyer to retire, it would allow President Biden to name the replacement – as opposed to chancing it to whoever might take the presidency in 2024. Erwin Chemerinsky, the dean of UC Berkeley’s law school has said that Breyer retiring now would not only allow him to protect his legacy but also clear the way for a younger justice to share his judicial outlook.

Ahh, but it’s not just a younger justice that the liberals are after. They want someone who is young and ultra-liberal. And they know that they can apply just enough pressure to President Biden to name someone that fits that bill.

Decades ago, Biden may not have named a liberal justice. After all, he clung to his Catholic roots a lot more. Now, he’s all but abandoned those Christian views in favor of being loved by his liberal constituents.

Dershowitz explains that Breyer is a “great, great man.” The radical left, as he explains them, are trying to point out that even though Breyer is healthy, it’s important that Biden be the one to appoint his successor. It may be the only opportunity while the Democrats still maintain the majority in the Senate.

Dershowitz sees through the radical left. It’s likely that Breyer sees through them, too. The goal of the liberals is to turn the Supreme Court into their personal political tool rather than “allowing the natural phenomenon to occur.”

Dershowitz points out that Justices should be able to sit for as long as they are healthy. He goes on to explain that “some of our greatest decisions were written by octogenarians,” citing such instances as Oliver Wendell Holmes and Louis Brandeis.

Right now, it appears that Justice Breyer is going to resist the pressure.

For the radical left to call upon his retirement is wrong. It’s not only age discrimination but it’s also going to politicize the Supreme Court. It’s going to backfire, as Dershowitz warns. He goes on to explain that this issue highlights what’s wrong with today’s hard-left – they want to politicize everything.

Hopefully, Breyer will hold onto his seat…if for nothing more than to spite the liberals who want to replace him with a younger, more liberal model.