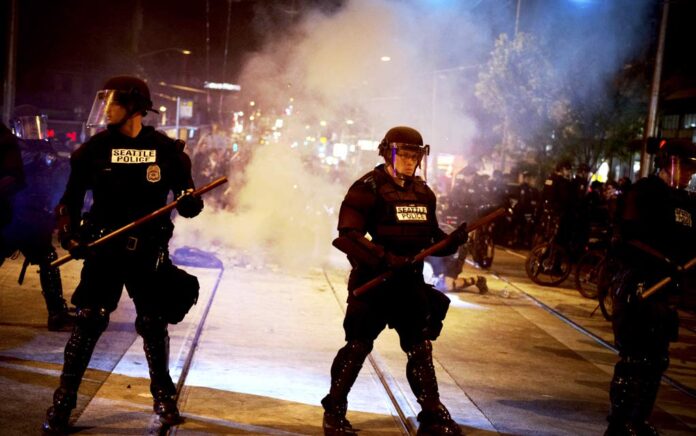 Imagine watching rioters tear apart New York City in one breath. Then, in the next breath, they’re being pardoned for their actions.

It seems that the Dems in NYC are a lot more forgiving than Republicans.

Being charged with a crime and sentenced to time in prison is a punishment. It is the consequence of illegal actions. And for most, that punishment serves as a deterrent. People don’t want to go to jail, so they choose not to commit the crime.

In New York City, things work a bit differently. The liberals hate to use prisons. They don’t want to charge people with crimes unless they really have to do it.

NBC News reported that there were 485 looting arrests made in NYC during the 1619 riots last year.  When a liberal news platform is breaking the news that nearly half of them had charges dropped, it shows the true hypocrisy of what’s going on.

The liberals in charge claim that they’re doing what’s best for the city. Yet, even the liberal news sees it as a sign of weakness.

73 that were convicted were given lesser charges of trespassing – which meant they’ll never see the inside of a jail cell. 40 of the cases involved juveniles, so they were sent to family court. And, there are only 128 cases remaining, and they’re still open.

New York City is sending a dangerous message. They’re de-criminalizing looting. They might as well go ahead and make it legal.

If people know that their charges will be dropped and that they won’t see jail, they’re going to believe that looting is okay. So, anytime they feel like putting on their social justice capes, they’ll loot with wanton disregard because they know that they won’t get in trouble.

The problem is that looters are dangerous. They create millions of dollars of damages. And, they cost the business owners countless dollars.

Throughout May and June of last year, looters smashed storefronts throughout Manhattan and the Bronx. Many of them were caught on surveillance video and others posted their accomplishments on social media. NYPD had all that they needed to make the arrests.

Unfortunately, the DA’s office is extremely liberal. Everything that the NYPD did was for nothing since all of those looters are back on the streets.

Looters feel justified destroying storefronts and stealing from businesses because that’s what insurance is for.

These business owners didn’t do anything wrong. They didn’t take political sides. They were just in the wrong place at the wrong time.

And the businesses that have been affected are disgusted to see that the looters are not being held accountable for all of the damage. “I was in total shock that everything is being brushed off to the side,” explains Jessica Betancourt, the president of the local merchants association and the owner of an eyeglass shop that was destroyed by looters.

Democrats seem to be confused about how they can help people. They are particularly interested in protecting people of color from law enforcement contact. Yet, when they drop charges and keep them out of jail, they’re only increasing crime. That means that law enforcement contact will be inevitable for them.

It’s simple, really. The best way to prevent civilians from having contact with law enforcement is to show them that committing crimes (like looting) is bad. And the best way to do that is with deterrents such as prison.

There’s no way to incentivize crime and come out on top. NYC is suffering because the Democrats are too quick to forgive and forget. Meanwhile, the ones that really suffer are the business owners that have to clean up everything on their own while watching the perpetrators walk away.