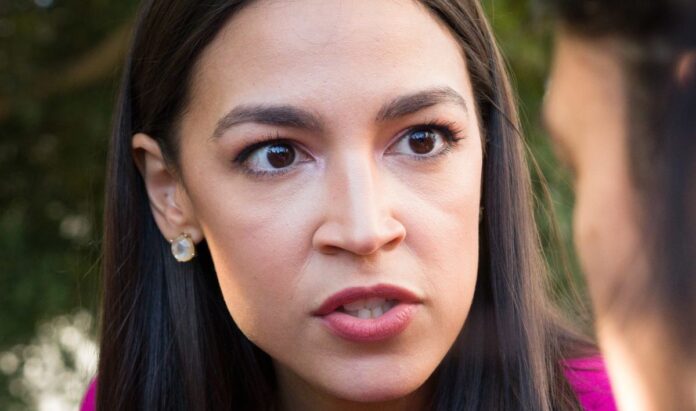 Donald Trump will stop being the President of the United States in less than 30 days. The Democrats won. Joe Biden will be the new president and Kamala Harris will be the new vice president.

Within the next few weeks, there’s a lot of work to be done in Congress. Issues need to be discussed, laws need to be passed, and it would be great if there could be some movement toward improving the economy.

Alexandria Ocasio-Cortez, however, wants to have a temper tantrum in the middle of Congress. Rather than just saying goodbye to Trump, she wants to waste the next few weeks of time in Congress by impeaching him.

Haven’t we already been through this? Don’t we need to leave what happened in 2020 in the past where it belongs?

Nope. AOC wants to throw a fit and demand articles of impeachment against Trump. Because, apparently, letting him go away quietly isn’t her style.

So, what is it that Trump did that is such an impeachable offense? “He is attacking our very election.”

Recorded comments to Georgia’s Secretary of State, Brad Raffensperger, were leaked on a one-hour phone call. Trump insisted that he won the state of Georgia and demanded that the Secretary find 11,780 votes – enough that it would overturn Biden’s victory in Georgia.

If you listen to AOC long enough, you’d feel outraged that Trump dared to pick up the phone and call Raffensperger. That’s what the young Representative is famous for. She nitpicks at the facts and spins the truth to the point that you believe she may actually be going somewhere.

There are quite a few flaws in her plan, however. She “thinks” it’s an impeachable offense. She’s said that if it were up to her, the articles would be on the floor “quite quickly.”

Well, we now know why she’s not the Speaker of the House. You can’t just throw articles of impeachment onto the floor without having more than a thought that it might be impeachable.

In the past, Democrats tried to impeach Trump on abuse of power. Is it an abuse of power to ask the Secretary of the State to find more votes? He wasn’t asking for anything illegal. He didn’t say that he wanted fake ballots created in order to get the votes. He made no threats. He simply said to find them.

The Democrats have also believed that Trump was guilty of obstruction of justice in the past. According to AOC’s partner in crime, Representative Ilhan Omar, the call was “clearly” impeachable because it’s “highly improper” and “extraordinarily corrupt.”

This is clearly an impeachable offense and I believe there is nothing under the law giving Trump immunity from criminal process and indictment for this conduct.

The law and order party is a farce. https://t.co/u4qJU7Kq0O

Ever notice this forever impeached president cannot help but project himself with others? “Rigged” elections, “highly improper,” and “extraordinarily” corrupt all can be adjectives for this disgraced and outgoing president. https://t.co/C0OQPf7Pzi

Again, though, while the call may have been improper, it wasn’t corrupt. He didn’t ask for any kind of unlawful activity to occur.

At no point did Trump say that he wants any kind of illegal activity to occur in order to find the 11,780 votes. It’s a small margin. Trump believes that there is an issue going on where the ballots are hiding. Maybe they got thrown away as they did in Pennsylvania. Maybe they got destroyed by a ballot counting machine. Stories like this have been popping up all across the country.

The only thing Trump is actually guilty of is asking the Secretary of State to be absolutely sure that all of the votes are there. “Find” the votes is a way of asking him to find where the real ballots that were cast for him are hiding.

The Democrats want to color the call to fit their narrative – that Trump is some kind of egotistical maniac who can’t accept the fact that he lost the election. With Democrats being known for their shady deals, it’s not asking a lot.

AOC, Omar, and some of the other Congresswomen who are known as The Squad are simply showing their ignorance at this point. Trump can’t be impeached over making a request. He’s already lost the election. He’ll be out of the White House in less than 30 days.

Shouldn’t they spend those 30 days doing something more constructive than figuring out ways to throw down articles of impeachment?