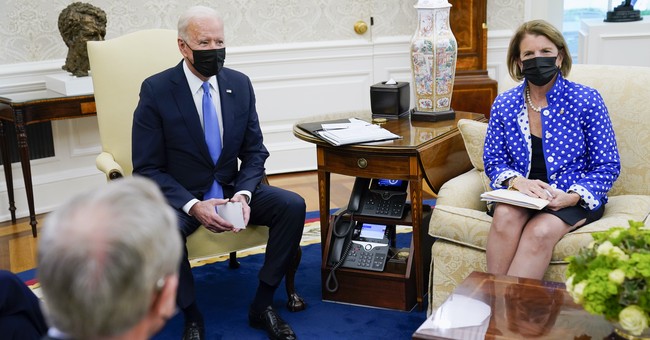 It’s difficult to get played by a senile old man whose brain has the consistency of pudding, but somehow, Republicans managed that feat today. Failure theater is back, and it’s reaching new heights.

As RedState reported earlier, Biden announced an agreement on a bipartisan infrastructure deal, complete with a grinning Mitt Romney and Lisa Murkowski standing beside him. Following that dog and pony show, the president then proceeded to demonstrate the finer points of existing with cognitive decline. Regardless, according to the Republicans on the negotiating team, this was supposed to be a great victory and show of unity.

Of course, then reality smacked them in the face. Biden, within an hour, let it be known that he would not sign the bipartisan agreement unless he was given everything else he wants in a reconciliation package that would naturally be passed along party lines.

This is like making a deal to buy a car and then refusing to hand over the keys until the buyer pays you an extra ten grand. What Biden did here was a betrayal of every pronouncement he’s ever made about how well he can work with Congress to get things done. Republicans are sitting here begging to give him a win, and instead of taking it, Biden blows the entire thing up to appease his far-left flank.

But here’s the thing – Republicans deserved this humiliation.

As I wrote some weeks ago, Republicans had zero business negotiating any deal on infrastructure, especially after prior government spending had already blown out inflation, leaving a big bill for middle America. In fact, after Biden initially stalled the process, I said it was a golden opportunity for the GOP members to say “we tried and have a nice day.” Instead, they apparently kept going, reaching today’s deal that survived all of a few minutes.

Sen. Mitch McConnell went on Fox News to discuss the issue. Here was what he had to say.

Last I checked, McConnell is the GOP leader in the Senate. It was his job here to shut down these ill-advised negotiations before they ever got off the ground. He may be playing perplexed bystander now, but ultimately, the buck stops with him. Why did he allow this to go on when it was obvious the Democrats were going to move ahead with reconciliation regardless?

Further, GOP members like Romney, Murkowski, and Moore-Capito should feel like the absolute buffoons they’ve shown themselves to be. Why, after four years of Democrats refusing to compromise on infrastructure, would they rush to give Biden a $1.2 trillion dollar “compromise” package? What was to be gained here, even if he hadn’t chosen to blow it up?

Republicans got played here, and there needs to be a reckoning. Far too many Senate Republicans lack any political acumen at all and they continue to show that on a daily basis. Joe Biden is not your friend. He’s not some moderate you can trust to make a deal with. Treating him that way was foolish from the start, and now the GOP has egg on its face. Some of us tried to warn them but they knew better, except they didn’t know better.

The win was there for Republicans if they had just taken no for an answer. Now, they’ve ceded the political high ground, having gone all-in on an unnecessary infrastructure deal while ending up where they would have anyway. If you continually refuse to take the win, you will end up taking the loss. Thus, you got what we got today.