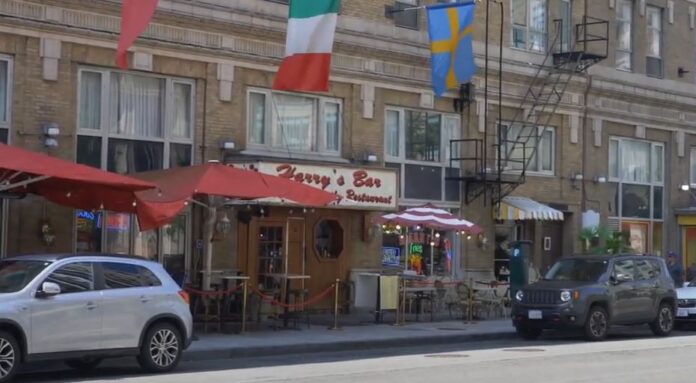 The Proud Boys are a loosely knit, extreme-far-right, neo-fascist, male-only, rag-tag bunch of misfits, who falsely claim to be a political organization. They actively promote political violence in the United States and Canada, but mostly, they just enjoy beating people up and destroying things. You know how it is. A bunch of guys out for a few laughs.

This upcoming Jan. 6 is being slated as the biggest shindig to ever grace, or disgrace, given your take, the city streets of DC. As electoral votes are being tallied up inside of the chambers, and if things go as planned, an estimated 1.5-million pro-Trump folks will be outside in the streets waiting to hear the final results.

D.C.s popular and well known Hotel Harrington, which hosts Harry’s Bar, is locking its doors on Jan. 4, 5, and 6, and not because they necessarily want to. Local liberal activists, which D.C. is full of, along with certain elected officials and the frazzled Washington Post, have been calling the hotel out.

They claim the Proud Boys have been using the hotel and bar as their unofficial D.C. headquarters during all of the recent pro-Trump rallies the group has been behind. On one of those weekends when the Boys showed up in large numbers, Harrys Bar was fined for not enforcing coronavirus mask mandates.

It’s important to note that Harry’s Bar is owned by John Boyles, a resident of Maryland, who is known to have hosted hundreds of Proud Boy events. Many people claim he is directly responsible for orchestrating much of the group’s street violence.

During their last pro-Trump rally the Proud Boys made headlines for ripping down Black Lives Matter flags and banners from Black churches and burning them just outside of the hotel and bar.

The Proud Boys somewhat of a leader, Enrique Tarrio, told the Washington Post that some group members in the past have stayed at the hotel and as a result, they frequented the bar. But he claimed they only did so out of convenience because of the hotels’ close proximity to downtown D.C., the White House, and the Trump hotel.

Tarrio also told the Post that the corner in front of the hotel and bar has always been used as a gathering point for the Proud Boys. He said this would also account for some of the guys grabbing a beer at the bar as long as they were right there anyway.

He also added how there should be no future problems since Harry’s is no longer large enough to accommodate their growing numbers anyway. Their most recent protest drew around 1000 members to downtown D.C.

If specifically asked to not frequent the hotel or bar, or any other facility for this matter, Tarrio said the group’s members would stay away. All he had to do was relay the message.

The night of the BLM banner fire, D.C. police spent all night just trying to keep different groups of protestors away from one another to prevent violence. At one point it even became necessary to form a police barrier.

Having no luck breaking through the barrier, what seemed like an entire regiment of Proud Boys doubled back to the hotel waving their stolen BLM banners and flicked their Bic’s in front of the hotel. All the while yelling, hooting, screaming racial and antigovernment slurs, and dancing in the flames, as all good demons do.

Here is the sad part. The Proud Boys are using the guise of “pro-Trump,” only to falsely self-justify each member’s individual love of everything violent. They are not patriots, they are not Republicans or Democrats and they are no more pro-Trump than Antifa is, and you can be certain, our president does not endorse the actions of either group.

But here’s a thought. Since the Proud Boys and Antifa would love to battle it out, let’s let them do it. Whichever side the very last guy left standing belongs to, wins. Then we lock his ass up and be done with it.

Anyone have a better plan?