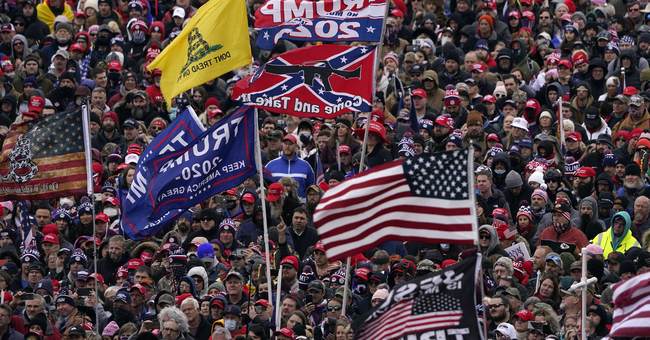 Anna Morgan-Lloyd, 49, of Indiana, was ordered by a federal judge to serve three years of probation, perform 120 hours of community service and pay $500 in restitution after admitting to unlawfully entering the Capitol. She pleaded guilty to a single misdemeanor charge under a deal with prosecutors.

After the riot, Lloyd described Jan. 6 on Facebook as the “best day ever.”

On Wednesday, she apologized to the court, her family and “the American people,” saying she went to Washington that day to peacefully show her support for Trump.

“I’m ashamed that it became a savage display of violence that day. And I would have never been there if I had a clue it was going to turn out that way,” Lloyd told the judge. “It was never my intent to be a part of anything that’s so disgraceful to our American people.”

In seeking probation for Lloyd, prosecutors noted that she was not involved in any violence and destruction or preplanning and coordination of the Capitol breach. Lloyd was invited by her hairdresser to drive to Washington to hear Trump speak, her attorney wrote in court documents.

In looking at the court file in the Morgan-Lloyd case, a few issues stand out as significant.

First, the Government never sought an indictment against her from a grand jury. She was arrested on a criminal complaint back in Indiana in late February. On March 1 the prosecutors filed a four-count “Information” in the District of Columbia charging Morgan-Lloyd with four counts of varying types of “trespass,” but those charges could only be felonies if the government alleged and proved certain aggravating factors that were not alleged. Thus, Morgan-Lloyd has never been charged by the government with a felony, nor did they ever allege in any court document that her conduct was consistent with a felony offense.

Second, even in the factual affidavit filed in support of the criminal complaint, the FBI agent did not allege any acts of violence or vandalism against Morgan-Lloyd. She was initially identified by someone who saw a Facebook posting by Morgan-Lloyd’s travel companion, and the charges were only filed in late February once her identity had been confirmed.

So this case is one you would put at the far end of the “mostly peaceful” side of the range of conduct that took place on January 6. The factual admissions that were the most “damning” against Morgan-Lloyd were the Facebook posts and videos put up by her and her traveling companion in the days following January 6, stating that they had been among the first 50-100 people inside the Capitol, and that doors and windows were broke by the crowd on the way inside. They stated that they had to remove broken pieces of glass from their clothing.

The imposition of a three-year term of probation is not all that it might appear to be either. It’s quite likely that the entire three-year period will not end up being served by Morgan-Lloyd, nor will she be on “active supervision” for a substantial part of that time. That means she will not be required to be in contact with a probation officer.

Given that Morgan-Lloyd is a 48-year-old grandmother with no prior criminal history, there is little chance that the Probation Officer assigned to her in Indiana is going to be kept busy keeping her out of trouble. Judge Lamberth said the following during the sentencing hearing:

U.S. District Court Judge Royce Lamberth said he was giving her a “break,” but didn’t want others to think that probation — and not a stiffer sentence — would be the norm.

“Legally, I could give you the six months, but is that really what we want our judiciary to do?” the judge asked.

Lamberth said he struggled with what would be an appropriate sentence for Lloyd because he views the riot as a serious crime. “This wasn’t a peaceful demonstration the way it turned out. It was not an accident,” he said. “It was intended to and brought a halt to the very functioning of our government.”

Four other people — a Tennessee man, a Maryland man, and a Virginia couple — have pleaded guilty to the same misdemeanor charge in the last two weeks.

It will be interesting to see if/when there is a case where the government sought and obtained an indictment charging felony offense, but then agrees to a plea bargain to a misdemeanor offense.