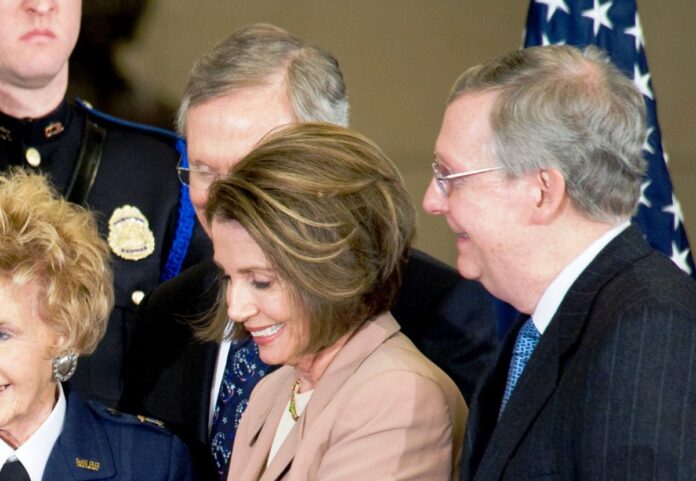 It’s one thing to support your political party and something completely different to not care who you hurt in the process. Representative Gwen Moore decided that she was going to vote for Pelosi on the House floor, even if she did announce that she tested positive for the coronavirus.

The Democrats seem to be ready to prove that they want to tell Americans to do one thing while they do the exact opposite. We’re supposed to be responsible when we test positive by making sure that we quarantine and avoid contact. Yet, Representative Gwen Moore is clearly more concerned about making sure that Pelosi gets to continue being the House Speaker.

The Democrat in Wisconsin tested positive six days before the vote would happen. According to the CDC, that means that she should be quarantined and self-isolated for at least 10 days following a positive test. Nope. She doesn’t want to let Pelosi down. So, she traveled – and she swore up and down on Twitter that her quarantine was over and that she was medically cleared.

Really? Isn’t that interesting. Most people have to wait 10 days. Apparently, if you’re a Democrat, those rules don’t apply.

There are other members of Congress who were able to vote on Sunday, too, with special arrangements because they were within their quarantine windows. Although they tested negative, they still had to quarantine. At least there are some in Congress who are choosing to be responsible. Representative Moore decided to throw caution to the wind – and who knows who she may have infected on her way to keep the 80-year-old Democrat in power.

Not surprisingly, many were surprised to see Moore reporting in person for duty. It was irresponsible – and she’s clearly not setting any kind of a good example to the people of Wisconsin. Apparently, you can tweet that you’re positive and tweet a few days later that you feel fine and be able to go where you want and do what you want without any kind of consequence.

The Democrats continue to prove that they believe the rules are for others, not for them. Had someone from the GOP done what Moore did, they would have been falling over themselves to condone the actions. Meanwhile, Republicans are supposed to sit back and welcome Moore to the House floor with welcome arms.

The three members of Congress who were allowed to vote with special circumstances due to existing quarantine conditions, two Democrats and one Republican, were given a special entrance and were enclosed by plexiglass within the gallery.

What really doesn’t make any sense is that when Representative Moore made the announcement on December 28 that she tested positive is that she said she is “isolating from others.” How does traveling to Washington DC and exposing countless people translate to isolation? Less than six days after that announcement, she was in DC and making the vote in person.

This is more ignorant of a move than Pelosi deciding that it was okay to get her hair done in LA among all of the salon closures. It’s more ignorant than Newsom heading to a birthday party at a restaurant where there were more than 10 in attendance.

Let’s give a slow clap for the Democrats here. They continue to make rules that they refuse to follow for themselves. It’s become crystal clear that they would rather hold onto the power than to ensure that others live.