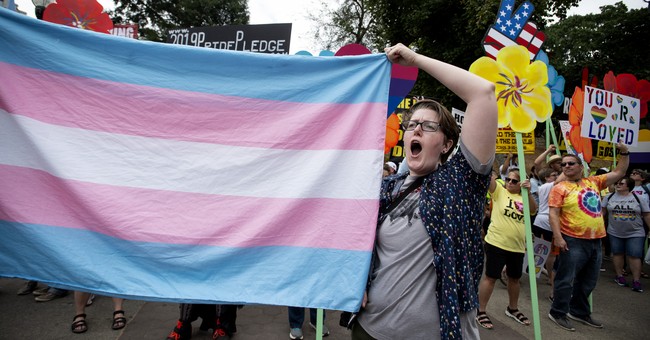 On 6 April 2021, the Arkansas General Assembly passed Act 626 into law, overcoming Governor Asa Hutchinson’s veto less than 24 hours prior. The Act states that “a physician or other healthcare professional shall not provide gender transition procedures to any individual under eighteen (18) years of age,” nor refer any individual to another healthcare provider for the same purpose.

A federal lawsuit, Dylan Brandt, et al v. Leslie Rutledge et al, was subsequently filed in the US District Court for the Eastern District of Arkansas, contending that the law as passed violates the Equal Protection Clause of the Fourteenth Amendment “by enacting legislation that wholesale prohibits healthcare providers from providing them with certain categories of medically necessary care, or referring them to another provider for such care.”

The DoJ Civil Rights Division filed a “statement of interest” in support of the plaintiffs on 17 June that included the following signatories:

[As an aside, these women just made my list for a forthcoming article, entitled, “What’s The Worst Thing in the World? A Leftwing Woman.”]

While the worldwide Left – including The Hologram’s White House and DoJ – are spinning Act 626 as an outrageous violation of human and civil rights and a violation of the 14th Amendment, the reality is that the LGBTQ+ onslaught against existing societal norms is in reality an attack on traditional morality and Judeo-Christian faith. In short, this is just their latest assault on the family by undermining the time-honored practice in society and the law of parental control of minor children – without the state or cultural Marxists interfering in those personal decisions. And that is exactly what the lawsuit filed against Act 626 and DoJ’s “statement of interest” are: Marxist efforts to destroy the nuclear family and parental decision-making by substituting what “the government” thinks is best for minor children.

Ponder the implications of these passages from the DoJ statement of interest. What kind of warped and immoral thinking can produce such nonsense?

The United States has a strong interest in protecting the rights of lesbian, gay, bisexual, and transgender individuals. [Page 2]

Cvrk: does that “interest” include the right to force healthcare provides to administer medications and conduct gender-altering surgeries on minor children without parental consent? By the way, it’s not in my “interest” to permanently damage children through chemical or surgical procedures that alter their sex. That is child abuse to me, but then this administration is all into similar forms of abuse, including the spousal and elder abuse practiced every day in parading The Hologram before the public in a diminished mental capacity.

Cvrk: Based on their sex assigned at birth. Think of that phrase: whatever the baby’s sex decided by examining the obvious “plumbing” by the attending physician and parents is considered by DoJ to be arbitrary. Total insanity. And what is “medically necessary care,” and who determines that (since DoJ wants to get parents pulled from the decision-making process).

Cvrk: Now we get down to brass tacks. “Gender transition procedures” are patently absurd, and a person’s DNA proves that. A temporary mental state should not be the basis for a permanent physical sex change, especially for minor children without parental consent. The government would force these changes to be made without regard to increasing considerations of regret expressed by those who had the sex-change surgery, as reported here, here, here, and here. How is this “in the interests of the United States,” or is this “statement of interest” just a personal vendetta by the lunatics in DoJ’s Civil Rights Division?

… gender-affirming care – i.e., procedures that affirm the gender with which one identifies. [Page 6]

Cvrk: I identify as a sexless Martian amoeba. Who is the US government to deny my self-identification under the logic of this sentence, or my need for the “gender-affirming care” of unlimited quantities of draft beer at government expense to help me adjust to my self-identified condition? You might think this argument is absurd, but then consider how absurd the statements made by the government in their filing would have been considered just a decade or so ago! We are witnessing the arbitrariness and chutzpah of the cultural Marxists in our midst every single day in every nook and cranny of American society.

[C]isgender minors are able to receive gender-affirming care that involves the exact same treatment denied to transgender minors, simply because for one minor the care affirms their “biological sex” as defined in Act 626 and for the other it does not. [Page 6]

Cvrk: And you probably thought I was off the rails in calling the fools at DoJ who wrote this statement of interest “cultural Marxists.” Ever hear the word “cisgender” before? That’s the latest Marxist lingo that differentiates “transgenders” (someone with sexual dysphoria) from “normals” (someone “whose gender identity corresponds with the sex the person had or was identified as having at birth”). How convenient! A new term added to the long list of Marxist words such as social justice, sustainability, and undocumented workers – solely to advance a pollical cause important to the Left (the destruction of the nuclear family). [Note: even Merriam Dictionary has been corrupted in buying into the notion of that gender identity is arbitrary and not biologically based.]

Conclusion: the above excerpts from DoJ’s statement of interest in this case in support of the illusory rights of minor children claiming to be transgenders are as equally bad as DoD’s justifications for purging the US military of “domestic terrorists” loosely defined as white nationalists, white supremacists, and neo-Nazis. And the arguments made are equally arbitrary and baseless, too.

I could only make it through 6 pages out of the 28 total in DoJ’s filing, but the purpose and intent are crystal clear: attack the nuclear family on a new front and insert the state into the most private of family decision-making, as well as to continue the implementation government controls that regulate every aspect of life in America. Because “the government knows best,” amirite, amirite?

It used to be a free country until we let the Marxists take over our political and cultural institutions.

This case bears close watching, as it will inevitably make it to the US Supreme Court for disposition.