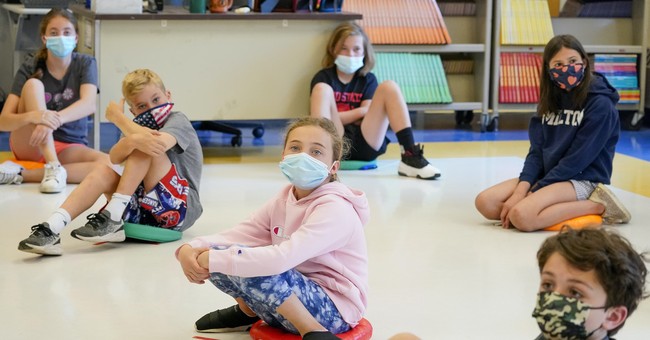 They do not deny this, largely because they cannot deny it with any intellectual honesty. The point of Critical Race Theory is to divide white and black into oppressor and oppressed. It creates a class divide that is much greater than what we actually see in reality. The theory does not match the world.

As far as academic theories go, the first red flag is the fact that it has its own built-in counter for anyone who would challenge it: You are privileged, and therefore cannot see it. That is not a fair response to challenge, nor does it stand up in any meaningful rhetorical discussion. But, this isn’t about any civilized rhetorical discussion. It’s about division.

I mentioned in a RedState VIP post on Friday that, contrary to what the activists are saying right now, the history of racial strife in America was taught long before CRT became an educational tool (it originated as a legal theory and only recently transitioned into an educational application). For decades, we have taught in our classrooms that so much of American history is problematic in terms of how our country has treated minority groups, and that hasn’t stopped simply because some states are passing laws to ban CRT in our districts and schools.

But, you would not know that just listening to the people losing their minds that parents might expect to have a say in how their taxpayer dollars are being spent to divide their kids from one another. Late last week and over the weekend, there were many who lamented that Juneteenth was a federal holiday we can’t teach about in school… except that the bills garnering the most public attention (like in Florida and Texas) specifically stated that such issues have to be discussed in history classrooms.

Take Texas, for example. Juneteenth has been a recognized holiday in that state for decades, because the day originated in Texas. Moreover, the Texas Essential Knowledge and Skills for the state’s education system include this in seventh grade social studies:

(2) History. The student understands how individuals, events, and issues through the Mexican National Era shaped the history of Texas. The student is expected to:

(D) identify the individuals, issues, and events related to Mexico becoming an independent nation and its impact on Texas, including Father Miguel Hidalgo, Texas involvement in the fight for independence, Jose Gutierrez de Lara, the Battle of Medina, the Mexican federal Constitution of 1824, the merger of Texas and Coahuila as a state, the State Colonization Law of 1825, and slavery;

(4) History. The student understands how individuals, events, and issues shaped the history of the Republic of Texas and early Texas statehood. The student is expected to:

(A) identify individuals, events, and issues during the administrations of Republic of Texas Presidents Houston, Lamar, and Jones such as the Texas Navy, the Texas Rangers, Jack Coffee Hays, Chief Bowles, William Goyens, Mary Maverick, Jose Antonio Navarro, the Cordova Rebellion, the Council House Fight, the Santa Fe Expedition, slavery, and the roles of racial and ethnic groups[…]
(C) identify individuals, events, and issues during early Texas statehood, including the U.S.-Mexican War, the Treaty of Guadalupe-Hidalgo, slavery, and the Compromise of 1850.

(5) History. The student understands how events and issues shaped the history of Texas during the Civil War and Reconstruction. The student is expected to:

(A) explain the central role the expansion of slavery played in the involvement of Texas in the Civil War;

Then, in eighth grade social studies:

(7) History. The student understands how political, economic, and social factors led to the growth of sectionalism and the Civil War. The student is expected to:

(A) analyze the impact of tariff policies on sections of the United States before the Civil War;
(B) compare the effects of political, economic, and social factors on slaves and free blacks;
(C) analyze the impact of slavery on different sections of the United States; and
(D) identify the provisions and compare the effects of congressional conflicts and compromises prior to the Civil War, including the role of John Quincy Adams.

(8) History. The student understands individuals, issues, and events of the Civil War. The student is expected to:

(A) explain the roles played by significant individuals during the Civil War, including Jefferson Davis, Ulysses S. Grant, Robert E. Lee, and Abraham Lincoln, and heroes such as congressional Medal of Honor recipients William Carney and Philip Bazaar;
(B) explain the central role of the expansion of slavery in causing sectionalism, disagreement over states’ rights, and the Civil War;
(C) explain significant events of the Civil War, including the firing on Fort Sumter; the battles of Antietam, Gettysburg, and Vicksburg; the Emancipation Proclamation; Lee’s surrender at Appomattox Court House; and the assassination of Abraham Lincoln; and
(D) analyze Abraham Lincoln’s ideas about liberty, equality, union, and government as contained in his first and second inaugural addresses and the Gettysburg Address and contrast them with the ideas contained in Jefferson Davis’s inaugural address.

(9) History. The student understands the effects of Reconstruction on the political, economic, and social life of the nation. The student is expected to:

(A) evaluate legislative reform programs of the Radical Reconstruction Congress and reconstructed state governments;
(B) explain the impact of the election of African Americans from the South such as Hiram Rhodes Revels; and
(C) explain the economic, political, and social problems during Reconstruction and evaluate their impact on different groups.

And not to continue beating you over the head with this, but in high school:

(3) History. The student understands the political, economic, and social changes in the United States from 1877 to 1898. The student is expected to:

(6) History. The student understands significant events, social issues, and individuals of the 1920s. The student is expected to:

(A) analyze causes and effects of events and social issues such as immigration, Social Darwinism, the Scopes Trial, eugenics, race relations, nativism, the Red Scare, Prohibition, and the changing role of women; and
(B) analyze the impact of significant individuals such as Henry Ford, Marcus Garvey, and Charles A. Lindbergh.

(9) History. The student understands the impact of the American civil rights movement. The student is expected to:

(A) trace the historical development of the civil rights movement from the late 1800s through the 21st century, including the 13th, 14th, 15th, and 19th amendments;
(B) explain how Jim Crow laws and the Ku Klux Klan created obstacles to civil rights for minorities such as the suppression of voting;
(C) describe the roles of political organizations that promoted African American, Chicano, American Indian, and women’s civil rights;
(D) identify the roles of significant leaders who supported various rights movements, including Martin Luther King Jr., Cesar Chavez, Dolores Huerta, Rosa Parks, and Betty Friedan;
(E) compare and contrast the approach taken by the Black Panthers with the nonviolent approach of Martin Luther King Jr.;
(F) discuss the impact of the writings of Martin Luther King Jr. such as his “I Have a Dream” speech and “Letter from Birmingham Jail” on the civil rights movement;
(G) describe presidential actions and congressional votes to address minority rights in the United States, including desegregation of the armed forces, the Civil Rights Act of 1964, and the Voting Rights Act of 1965;
(H) explain how George Wallace, Orval Faubus, and the Congressional bloc of southern Democrats sought to maintain the status quo;
(I) evaluate changes in the United States that have resulted from the civil rights movement, including increased participation of minorities in the political process; and
(J) describe how Sweatt v. Painter and Brown v. Board of Education played a role in protecting the rights of the minority during the civil rights movement.

These were standards adopted in 2018, though the standards are not too much changed from previous iterations. If a child does not learn what CRT proponents claim they should be taught in school, then that is the fault of the teacher because the standards as clear as day. It should then be up to parents to let the teacher, the school, and the district know their children aren’t being taught what the state already demands they should learn.

Critical Race Theory proponents want you to think that the only way this history gets taught in schools is through the adoption of their worldview, but indoctrinating with any particular worldview runs counter to how education should operate. The point of education is to teach a student to think, not tell them how to think. And it damn sure isn’t about teaching kids how to think of themselves and others solely through the lens of racial identity.

It is a fact of history that the United States is guilty of oppressive behavior toward those who were not white. It is also a fact that some of those feelings still linger. There is trouble within our system that often leads to people with black and brown skin not getting a fair shot because of a combination of the color of their skin and their refusal to stick to the song and dance that makes them “acceptable” in the eyes of those who hold prejudiced views. However, this is not something that will ever be “fixed” by introducing into our schools some ideas and theories meant to divide them by race and class instead of working to help them all advance.

It should disgust any educator who is told to feed these ideas to their students because ultimately it does all of them a disservice. It gives them something to blame, resent, or feel a tremendous amount of guilt over.

Proponents say that making white people feel uncomfortable isn’t bad. That it has to happen in order for justice to occur, but that isn’t true. These people believe in racial “equity” instead of “equality,” which is far more harmful to everyone than. Equity is the idea that you take from those who have in order to make everyone equal. Equality is the push to bring everyone up to the same level. One dismantles while the other builds.

We should not be trying to tear each other down, but the most vocal proponents of Critical Race Theory wish for just that. The only way to fix the system is to tear it down, but in the rubble, they’ll only find countless young people, black and white, who have been hurt in the process.