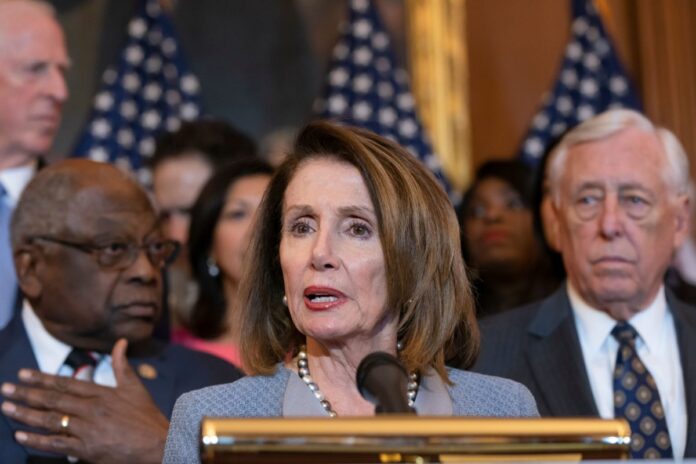 By now, it’s no secret that Democrats, aside from supposedly winning the White House, didn’t do well in the 2020 congressional elections – particularly in the House of Representatives. In fact, they performed so poorly that they just barely were able to keep their majority.

This was never seen more clearly than in the 117th Congress’s first convening on Sunday.

As is typical, newly elected members were sworn in, and positions within the lower House were voted on, including that of House Speaker. Californian Democrat Nancy Pelosi has held that particular seat for several years now, and, as such, has seemingly helped to lead the party ever leftward.

And while she did win the re-election for the seat, it was noted that the margin of difference was very slim.

Now, it’s pretty clear that these votes were given pretty much according to party lines. After all, what Democrat would vote for a Republican to rule the House when the majority doesn’t lie with that party?

However, the vote was apparently expected to be relatively close. In fact, to allow for the most significant number of votes possible, COVID procedures were changed.

Currently, three house members are in “quarantine status,” according to CBS News, and would not regularly be permitted into the room. But to make sure they got to vote, a small plexiglass room was erected in the House chamber to hold these members and keep them separate from others.

CBS News reported, “In a striking symbol of how the virus complicated proceedings, a special section of the House chamber was enclosed in plexiglass so three lawmakers who are in ‘quarantine status’ would be able to vote… Members using the space were required to have tested negative for the virus.”

I know, you’re shocked Pelosi would change things up to keep her seat of power… not.

Anyway, it seems she likely won’t be in that seat much longer, regardless of her recent win.

As I already mentioned, House Democrats didn’t too well in their campaigns or elections. Naturally, this means that Republicans, as the other half of the aisle, did exceptionally well. In fact, not a single Republican lost their House race in 2020, giving them a significant gain and causing the Dems to lose a whopping 12 seats in the process.

Under Pelosi, the Democratic Party has been reduced to its smallest congressional number since the 1940s – making this nearly another 2010.

If you recall, during the 2010 elections, the Democrats lost the most significant number of seats since 1938. Similarly, the Republicans had not had such a period of growth since that same year. 2010 also boasted the largest House swing since 1948.

And if 2020 is any indication, it seems the Democrats are well on their way to such losses again.

In fact, it is expected that by 2022, the House will be controlled by Republicans again, thanks in no small part to the Congressional Leadership Campaign Committee or the House GOP’s super PAC. The PAC has recently launched a massive digital ad campaign against the Dems, with 21 specific left-leaning House members targeted. All 21, including Illinois’ Cheri Bustos, voted for Pelosi’s recent re-election.

Naturally, this shift will mean that Pelosi will be ousted from her seat as Speaker that year.

However, she has already hinted that this will be her last term anyway, as she is already 80 years old.

But many believe Pelosi won’t even make it that far. Given the high losses her party suffered this year and the incredible gains of the Republicans, several on both sides of the aisle have speculated that she may bow out early, not even finishing her current term.

If she doesn’t, the liberal Speaker will seem more than somewhat responsible for the shift that is about to take place. 2010 was humiliating enough for her. And it’s unlikely that she will want to go through it again, especially as she is on her way out.

Now, this doesn’t mean that Pelosi won’t be around for the next 12 months or so to annoy the crap out of us and make sure Biden gets whatever he and his liberal VP want. However, it does seem to be at least some good news for the future of our government.