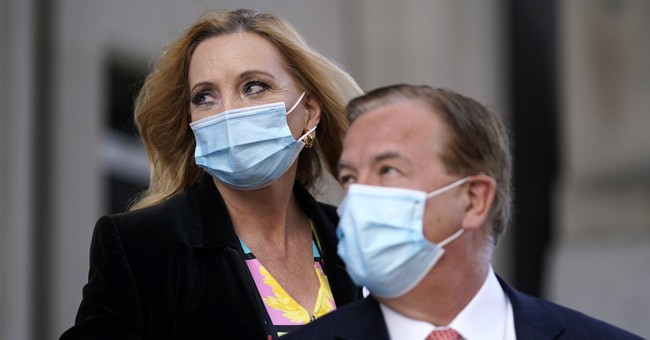 Mark and Patricia McCloskey plead guilty to charges related to an incident that went viral last year when the couple was photographed brandishing firearms while a Black Lives Matter (BLM) demonstration took place in their gated neighborhood. In a recent appearance on Newsmax, they explained why they gave a guilty plea.

Mark stated that the prosecutor “dropped all the felony charges, all the gun charges, and charged me with a crime that said I purposely placed other people in apprehension of imminent fear of physical injury.”

“And, by God, I did it,” McCloskey continued. “That’s what the Second Amendment was there for … and I couldn’t say no to that one.”

The two will be forced to forfeit the weapons they were holding when they confronted BLM protesters who were marching near their home last summer.

McCloskey stated that they were able to avoid being convicted of more serious charges that would have resulted in prison time. “As I said on the courthouse steps, if that’s a crime in Missouri, I did it, and I’ll do it again,” he said, explaining that he would be compelled to pay a “parking ticket, a $750 fine, and that’s it.”

“God came knocking on our door disguised as an angry mob, and it transformed us,” he added. “Patty and I decided to just put the rest of our lives on hold and do what we can to save this great nation.”

McCloskey continued: “Our liberties are being stripped from us so quickly, and the country is deteriorating so fast, we just said, ‘We don’t care what it takes, we’re going to put everything else on hold, and do what we can to restore the America that we knew when we were kids.'”

After the incident went viral, the couple stated that the BLM protesters threatened physical harm.

From the beginning, it was apparent that the couple was being charged for political reasons. Anyone could see that they were defending their home from a mob that had broken into their gated community to stage a protest in front of a government official’s home. Anyone living in that area would have a right to be frightened by a group of loud protesters walking through their community, especially given the violence that ensued after the murder of George Floyd.

Indeed, Circuit Attorney Kim Gardner, who had charged the couple, was stripped of her role in the case, after a judge ruled that she began prosecution against them for political reasons. If the situation had been reversed and a group of MAGA supporters were marching in a neighborhood and a black person brandished a firearm, the authorities wouldn’t have bothered with a prosecution.

While it does not seem fair that the McCloskeys should be punished, at least they will not serve jail time. The notion that they were prosecuted in the first place is absurd. But since everything must be political, people like Gardner will not be afraid to use their positions to punish their political opposition.