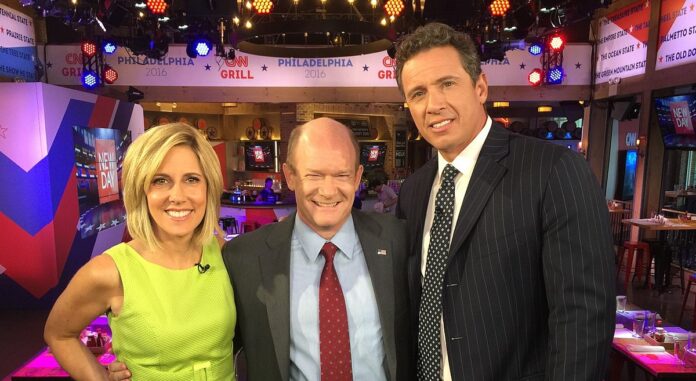 The United States was built on Christian values. To this day, we use money that says, “In God We Trust” and we say the pledge of allegiance where it’s “one nation under God.”

Why is it that we’re allowed to live in a country where faith is the very foundation, yet we’re mocked for practicing our faith on a daily basis?

It appears that the Democrats have decided that God doesn’t have a place within politics. And the liberal journalists go along with it.

According to the American Press Institute, the first obligation a journalist has is to the truth. They must remain loyal to citizens in order to be an “independent monitor of power.”

To put it simply, journalists are supposed to carefully ride the line between political parties in order to report on the truth, regardless of how their personal political beliefs may lean.

Why is it that a Senator is being mocked for his faith by a CNN reporter? Marco Rubio should never have to endure a title like “Mr. Bible Boy” – especially not from someone who claims to be a journalist.

Perhaps that is the problem. Chris Cuomo has stopped being a journalist. Now, he’s a liberal bully. Cuomo teases that Marco Rubio has a “Bible quote for every moment.”

Cuomo isn’t the only CNN “journalist” who has made it a habit of mocking Republicans. Rather than reporting on the truth, they like to pretend that they’re late-night TV show hosts. They sprinkle in their anti-conservative opinions like sprinkles, looking to poke fun at political leaders because they think it will earn them a laugh and a spike in the ratings.

Regardless of what the left and the right may be doing, CNN journalists have become predictable. Chris Cuomo and Don Lemon are both guilty of defending the Democrats and ripping into the Republicans.

Lemon went as far as moving his wedding ring to his pinky to speak in the tone of a stereotypical mob boss. It was meant to be a bad impersonation of President Trump, mocking the leaked phone call to Brad Raffensperger, the Georgia Secretary of State. Raffensperger was called a “man of faith” yet Rubio is mocked for being one.

If you’re going to be a journalist of integrity, you have to treat everyone the same. You cannot mock one party for having faith while holding another one up. You also can’t call Congressmen names because you don’t like the way that they continue to stand behind the president.

CNN is supposed to be a reliable news network for the masses. Every American, regardless of political stance, should be able to trust what the journalists are saying. However, it appears that Cuomo and Lemon are trying out for Saturday Night Live with their ridiculous antics. If they want to be the next Jimmy Fallon or Seth Meyers, they need to leave CNN and try out for a talk show host.

Until they begin hosting the late-night shows, however, they have to remember that they are journalists.

As for picking on Rubio for using Bible quotes, it is simply childish. This is what we’d expect at a schoolyard – not for the journalists who are supposed to be representing our nation. Cuomo complains that Rubio doesn’t use the Bible to actually speak the truth or act in the best interest of his state or country.

Rubio chose to fire back by reminding Cuomo that if he believes the words that were written thousands of years ago are still relevant to current events, the Bible is more than a book – “It’s the word of God.”

Interesting. So, Cuomo may actually be a man of faith. However, he’ll tease people for it if they’re on the wrong side of the political line from him. Yeah, it’s time to stop calling CNN reporters “journalists.” They lost that right when they decided to side with the liberals.