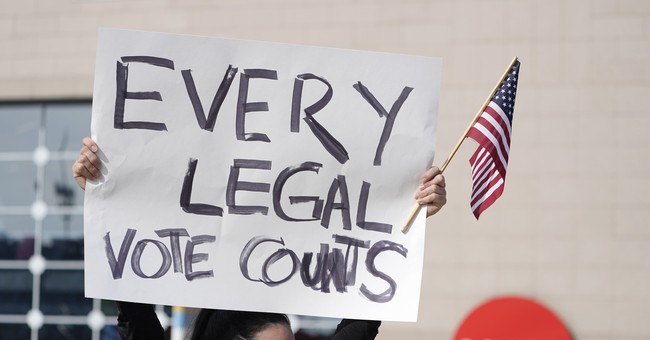 John Solomon’s site “Just The News” has obtained what is said to be a 29-page memorandum prepared by an Atlanta firm called “Seven Hills Strategies” (SHS) which identified — in real-time — problems observed by representatives of the firm as it provided logistical support to Fulton County election workers on Election Day 2020 and the days following. The memo is written in the form of a timeline of events and observations as they happened, laid out in chronological sequence, with the date and time entries of the events described.

This story is going to, by necessity, be a hit-and-run job, as I’m not able to fully capture the totality of the contents of the memo here. RedState also touched on it here on Friday.

Let me begin with this caution: I cannot vouch for the authenticity of this document. It surprised me — to put it mildly — that this document exists, yet has remained secret for this long. Until its provenance is better known, and we know more about the company that created it, I would say let’s be interested in its contents, but not adopt them uncritically without more information about where it came from.

It might in some way explain the change in attitude reflected by Georgia Secretary of State Brad Raffensperger two weeks ago, when the Henry County Judge first granted the motion in a lawsuit seeking an audit of the election to allow an examination of copies of the Fulton County absentee ballots.

“From day one I have encouraged Georgians with legitimate concerns about the election in their counties to pursue those claims through legal avenues,” Raffensperger said. “Fulton County has a longstanding history of election mismanagement that has understandably weakened voters’ faith in its system. Allowing this audit provides another layer of transparency and citizen engagement.”

If his comments had been made in the aftermath of the publication of this Memorandum, the language would not have been much different. The memorandum appears to be a documentary record of the kind of “longstanding history of election mismanagement” that Raffensperger made reference to.

Here are some highlights, as they pertain to other issues of election integrity that have arisen in connection with Fulton County over the past 6 months.

During the evening on November 2, an SHS representative visited the location where Fulton County organized and distributed the “poll pads” and other election materials for each precinct. The “poll pads” were the electronic system for checking-in voters and confirming their registration in that particular precinct.

9:04PM – Rick is hard at work resetting poll pads for precinct SC11 that had only one of two bags of poll pads arrive despite the fact that the system at the warehouse showed that
both had been checked out of the warehouse and were on the way.

Many bags of poll pads and other election materials have not been packed yet and paperwork is not matching up (e.g. JC09). I had previously been told that the chaos was
caused by a shipping company calling this morning and cancelling their delivery, but this is clearly not the sole cause of the confusion. Fulton has not prepared their shipment
even if they had someone to ship it.

10:05PM – I speak with Johnny Harris, who says that all this chaos with the poll pads was caused by getting a flawed file from the Secretary of State’s office that didn’t mark/remove anyone who had voted during early voting so they were having to updating them all the way until now instead of on Saturday. Ran this by Ryan and Jordan, so say “easy to disprove.” Constant issue is that there isn’t poll pad paperwork to match with the full/loaded cases.

SS15 set aside to be picked up, but was suspiciously light. Opening it revealed that it was empty. It was never filled, so they are setting up the precinct now. Seems like a training/systems issue

Next, the memo covered observations by SHS representatives at State Farm Arena, where Fulton County located its operation for scanning/counting absentee, mailed-in ballots.

Too many ballots coming in for secure black ballot boxes. They are moving them over from Pryor St. in rolling bins 2k at a time. This seems like a massive chain of custody
problem. It is my understanding is that the ballots are supposed to be moved in numbered, sealed boxes to protect them

~7:00PM – Staff clearly working harder now that Ralph is here — for much of my time here everyone was joking around, taking breaks, and hanging out with no sense of
urgency.

After there were media reports that tabulating in Fulton County had stopped counting for the night on November 3, an SHS representative reported:

11:30PM – Amid reports from local news that the lights are off and the staff have left, I head to state farm.

11:52PM I arrive at State Farm Arena and report to Ryan Germany and Deputy SecretaryJordan Fuchs that they staff are still scanning on all five scanners. “The media just packed up when I released all the staff opening and sorting ballots,” Shaye told me.

The scanners worked to clear what had been processed that day instead of interrupting the processing flow to secure the ballots before leaving. Their goal is to hit Ralph’s 100k by the end of the night.

The scanners are jamming more frequently because of the heavy use. (I learn later that they are not built for this number of scans per day)

1:12AM – I arrive back at the warehouse to double check that materials from Election Day were collected correctly.

As I arrive, I see Rick and other Fulton leadership going through a mail cart. I am told that ‘they are doing a final check to make sure that everything has been recorded’ a moving from one stack to another but Tia, who was doing the intake, is nowhere to be found to give me final numbers. I am (cryptically) told that she is unavailable because she is “dealing with an issue.”

They’re pulling compact flashes (CF) a poll manager put a Mobile 2 CF in Mobile 1 CF slot, which is causing confusion now. People are talking about a “master bus” problem
for the backups, which seems to be causing the confusion.

1:48AM – Tia returns and tells me that 252 precincts have been taken-in and three are still at large.

Picking up in the afternoon on Nov. 4, the SHS representative recorded the following:

2:00PM – Return from lunch to learn that the remaining 2,800 ballots from last night’s drop boxes have been delivered. I am told that all absentee ballots (aside from UOCAVA) are here now. Again, this shipment came in mail carts instead of black ballot bins – Chain of custody issues.

That’s only just halfway through the memorandum. Much of the remainder details the constant logistical problems encountered by Fulton County simply because of the massive volume of mailed-in ballots that were used, due to changes in Georgia election law made ostensibly because of COVID concerns.

Entries that follow refer repeatedly to understaffing, staff being tired, mistakes being made, etc. This appears to be a combination of incompetence and a first-time election process where mailed-in ballots processed under the new rules was a number exponentially larger than any number of mailed-in ballots ever processed before, and the outcome of the election was decided by the mailed-in, ballot vote count.

The memorandum is a prime piece of evidence showing why the Georgia legislature was right to reverse many of the changes that were made in the election laws leading up to the 2020 election cycle, and return the voting process to the earlier system that didn’t create the kinds of confusion and mistakes which are reflected.