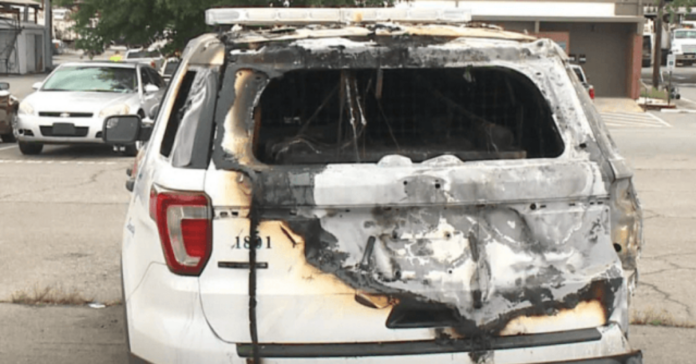 Firebombs are deadly. They cause a significant amount of damage and they could harm a significant number of people inside and around the area. Yet, this is the way that some liberals have chosen to communicate their needs and wants.

Black Lives Matter protesters clearly don’t care about who lives or dies. They’ve resorted to firebombing police cars to show that they want the ‘defund the police’ movement to move forward.

Killing is suddenly okay? Mass destruction is okay? Why is it that they think that cities will be okay with negotiating with terrorists? To call them anything but terrorists would be false – they’ve shown that they’re not interested in dialogue. They want to make the biggest mess they can while making ridiculous demands.

The police have to exist in order to maintain law and order. However, BLM protesters want to argue that there would be no crime if the police would just go away. The budgets could be used to make the world a better place, offering programs for the poor and the mentally unstable. That would certainly be great if it worked, but crime will always exist.

All the BLM protesters are managing to do is destroy property so that it has to be replaced – and that’s even more money that is being siphoned away from the people they supposedly want to help.

In Arkansas, a far-left journalist by the name of Renea Baek Goddard along with several other BLM activists have been charged with firebombing police vehicles. These bombings took place in Little Rock, Arkansas back in August – and now the individuals are being charged with the arson attacks.

New report: 4 far-left activists have been arrested following ATF investigation into firebombing attacks in Little Rock. Renea Goddard, one of the suspects, is a journalist. Other arrestees include Brittany Jeffrey, Aline Espinosa-Villegas & Emily Nowlin. https://t.co/rc5jTMUKmn

Attacks on police vehicles are happening all over the country. Activists are setting vehicles on fire, vandalizing with spray paint, puncturing tires, and making Molotov cocktails.

How is this an acceptable way to communicate a desire for the police to be defunded?

The idea is to show that the world can be peaceful without the intervention of the police. However, they have only proven that there are some severely demented individuals.

It’s not just the police vehicles that are being harmed in every instance, too. Often, there are innocent bystanders that get pushed and shoved by the activists or even injured by the shrapnel from explosions.

Black Lives Matter is not looking for peace. They don’t care about law and order. They’re terrorists who want to see the country change. They claim to want to end police brutality against black people yet they’ll burn down black businesses for miles on end in order to reach the police department. They say one thing and do another.

U.S. Attorney Cody Hiland made it clear in a statement that it’s not a peaceful protest if individuals are breaking into police compounds and fire-bombing police vehicles with homemade explosive devices. He also made it clear that the arrests were to “send a message that violence targeted toward law enforcement will not be tolerated.”

The double standard has to end.

Black Lives Matter activists don’t even realize that they’re going against everything that they supposedly stand for. They’re supposed to be promoting a better world by ending the violence. Then, in the next breath, they engage in violent acts by calling them protests. There’s nothing peaceful about firebombing.

Prosecutors are charging the individuals with malicious destruction of property as well as conspiracy to commit the acts along with the possession of a destructive device.

And that is how you do it. In Little Rock, the people who committed the crime are actually being charged with the crimes. It serves as a reminder that breaking the law will get you into trouble.

Too many cities where such crimes happen involve a slap on the wrist with liberal district attorneys choosing not to press charges. Hopefully, at least in Little Rock, these arrests will remind activists that firebombing isn’t an effective tool when communicating the desire to see change.