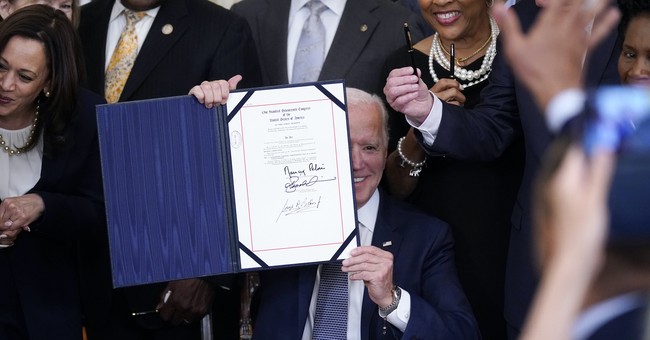 More than two years after President Abraham Lincoln signed the Emancipation Proclamation in 1863, Union soldiers marched into Galveston, TX to take control of the state and ensure that all Blacks slaves understood that they had been set free.

If that isn’t a cause for celebration, I don’t know what is–so that is what we did: with prayers, songs, dancing, and feasting. If you have ever been to a Black church on Easter (or frankly, any given Sunday), you have a picture of how that might have looked.

June 19th, or “Juneteenth” is the day marked to commemorate this final proclamation and cementing of freedom for Blacks. It has been celebrated on large and small scales throughout Texas, and other states, for 156 years.

I love the Juneteenth story, because it is a part of the history of my people. But did I need a federal holiday to recognize this? Meh.

While I do not mock or malign its passage as some conservatives are doing (looking at you, Candace O.), my ability to embrace the evocative power of celebrating wrongs made right, and honoring my ancestors doesn’t require federal acknowledgement or permission.

Frankly, I see Biden signing the holiday into law at this particular time for what it is: Another Democrat bright, shiny object to dangle in front of Blacks to say, “See! We caaaare… Look at what we did for you!” Then they’ll dine out on it for 50 years without doing anything to change the trajectory of inner-city education with school choice, address inner-city violence by funding and equipping a neighborhood police presence, or allow Blacks to arm themselves and partner with law enforcement to protect their own neighborhoods.

Maj Toure expressed similar points. While his list doesn’t necessarily match mine, it is a reflection on the fact that Democrats are big on symbolism to the Black community, but not so great on actual change that will positively affect the Black community.

Never forget: It was President Donald Trump who started the conversation last year, and pledged to make Juneteenth a national holiday.

The Left went bonkers, accusing him of pandering. Now that Jim Crow Joe is installed, and basically took Trump’s idea, they are treating it like some great Civil Rights feat.

I do not begrudge my fellow Black brothers and sisters who are lauding, celebrating, and embracing this milestone. Take the wins where you can get them! My hope is that the holiday will be used to expand education, not only about Juneteenth, but the varying shades of the Black experience that is part of the American experience. It can’t all be crammed into February and it should never have been expected to. Perhaps this will be the turning point of expanding on that Black History Month focus, in order to enlarge the understanding that our lives, our accomplishments, and our multitudinous contributions are tightly weaved throughout the fabric of American history.

So for those conservatives and Republicans whining about Juneteenth replacing Independence Day, you need to get some perspective. It was a Republican Party that was formed with the cause of ending slavery, and it was a Republican president who helped make it happen. How about forging that connection, rather than condemning a powerful historical moment that is the fulfillment of what Thomas Jefferson wrote in the Preamble to the Declaration of Independence:

We hold these truths to be self-evident, that all men are created equal, that they are endowed by their Creator with certain unalienable Rights, that among these are Life, Liberty and the pursuit of Happiness.

Juneteenth was the beginning of that fulfillment for Blacks.

As my colleague Kira Davis wrote:

What a missed opportunity. When cranky liberals try to pin racism on the right, any Republican worth their salt will fire back with, “The GOP is the party of Lincoln! The party of abolition!”

Truth. So why pass up this amazing marketing opportunity? Rather than being angry about this because some deem it a “political” holiday, conservatives should be taking every opportunity to remind Americans just who brought them this glorious day. You want to know how to maintain the momentum with the Black vote that Trump began? This is a great place to start. Trump is gone, but the Republican Party is still a political force. The task should not end with Trump. Why would we want that?

My colleague Jeff Charles took to task the Republicans who voted against passage of the Juneteenth bill, and who had some pretty dumb takes on why they chose to do so. Jeff rebuts them with finesse, and elegantly points out:

Juneteenth symbolizes an event that moved America closer towards living up to the values upon which she was founded. It was a moment when the nation began repenting of its original sin. To put it simply: This was a wonderful moment in our history. What good reason is there not to memorialize it?

If we are going to record history accurately, then we need to note that not all Republicans were against it becoming a national holiday. Sen. John Cornyn (R-TX) was a co-sponsor with TX Rep. Sheila Jackson Lee on the original bill introduced last year, and the Senate voted unanimously to pass the bill. Bipartisanship can happen, and the passage of this bill is the proof. So, despite the photo ops, anyone painting this as a Democrat accomplishment is dishonest, and deceptive.

Republican Governors are also embracing this holiday, and are fully on board. South Dakota Governor Krist Noem had this to say about Juneteenth, and how South Dakota would be honoring it:

Missouri Governor Mike Parson took the time to point out that the Missouri legislature was ahead of the curve in recognizing June 19th as “Emancipation Day” as far back as 2003.

It’s the dark threads in any tapestry that give it weight, substance, and definition. Let’s use this new holiday to our advantage in order to teach the proper history that highlights the good and the bad; a history where the dark, the light, and the in-between weave the complete American story.