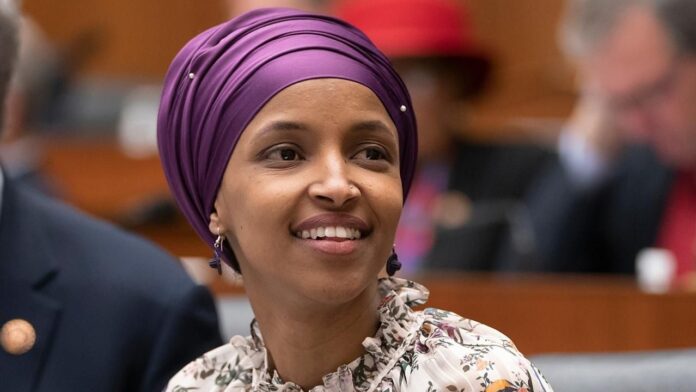 Ilhan Omar is an adnominally that represents a sect of people that believes America needs to fall. She would rather bite the hand of the nation that accepted her family as a refugee and spit on the graves of the people that gave their lives to give her the freedom she now enjoys than stand up for the country. Instead, she spews out the hatred and contempt that she has for the United States of America.

She is so bad that Republicans and Democrats both take to telling her to shut her mouth when she gets on her kicks of bashing America. And if her words were not traitorous enough, her comrade in arms put on their clown outfits and came out honking their horns, trying to defend their sister of death.

Omar had long dashed America and stated that the nation deserved what happen to it when the Islamic terrorist killed thousands at the World Trade Center. She sided with her Islamic brothers and gave them support when she should have condemned their actions since she claims to be a citizen of America.

Socialist defender Cori Bush was the first ignorant politician to come out and defend Omar for her notorious words. She wrote on Twitter that people needed to “Stop attacking @IlhanMN. Stop attacking us. I’m not surprised when Republicans attack Black women for standing up for human rights. But when it’s Democrats, it’s especially hurtful. We’re your colleagues. Talk to us directly. Enough with the anti-Blackness and Islamophobia.”

Omar and Bush are not colleagues of anyone that loves America. Her words are worse than being a turncoat during a war since she sits in a position of influence within American politics.

The next clown to make her entrance was none other than Islamic loving, Jewish hating Rashida Talib. The little clown was the driver of the clown car as it came racing onto the stage in defense of their ballooning partner.

Talib would write that “I am tired of colleagues (both D+R) demonizing @IlhanMN. Their obsession with policing her is sick. She has the courage to call out human rights abuses no matter who is responsible. That’s better than colleagues who look away if it serves their politics.”

The only one serving their politics is the tiny unfaithful woman named Ilhan Omar. She is the one that destroyed a family so she could marry the man that would grant her promotional favors to help her get ahead in Washington. She is the one that divorced her husband so she could have more money. She would cry that it is not fair that Islamic women could demand the death of people that did not agree with her terrorist faith.

The center of attraction was none other than Alexandria Ocasio-Cortez. Her pale-faced appearance came strutting in as the show was getting ready to close. She would write that she is “pretty sick & tired of the constant vilification, intentional mischaracterization, and public targeting of @IlhanMN.”

But no one really cares what she thinks because she is the one that used her relative in Puerto Rico as a prop to get ahead in politics. The claims that she made were fake and did not exist. The only reason anything became an issue is that she saw an opportunity to use her family and betray their trust.

The show got real when their beloved Progressive Caucus rang in on the fun. The American hating Islamic loving organization would state, “We cannot ignore a right-wing media echo chamber that has deliberately and routinely attacked a Black, Muslim woman in Congress, distorting her views and intentions, and resulting in threats against Rep. Omar and her staff. We urge our colleagues not to abet or amplify such divisive and bad-faith tactics. Members of the Democratic Caucus owe it to each other to pause, reflect, and engage directly with each other and misunderstandings arise, and stand together against cynical attempts to divide our caucus.”

And with one fellow swoop, all progressive just joined the camp of the terrorists around the world. They have crossed a line that is unforgivable in America. They are the turncoats that would have been tried as traitors at the formation of the greatest nation on Earth.